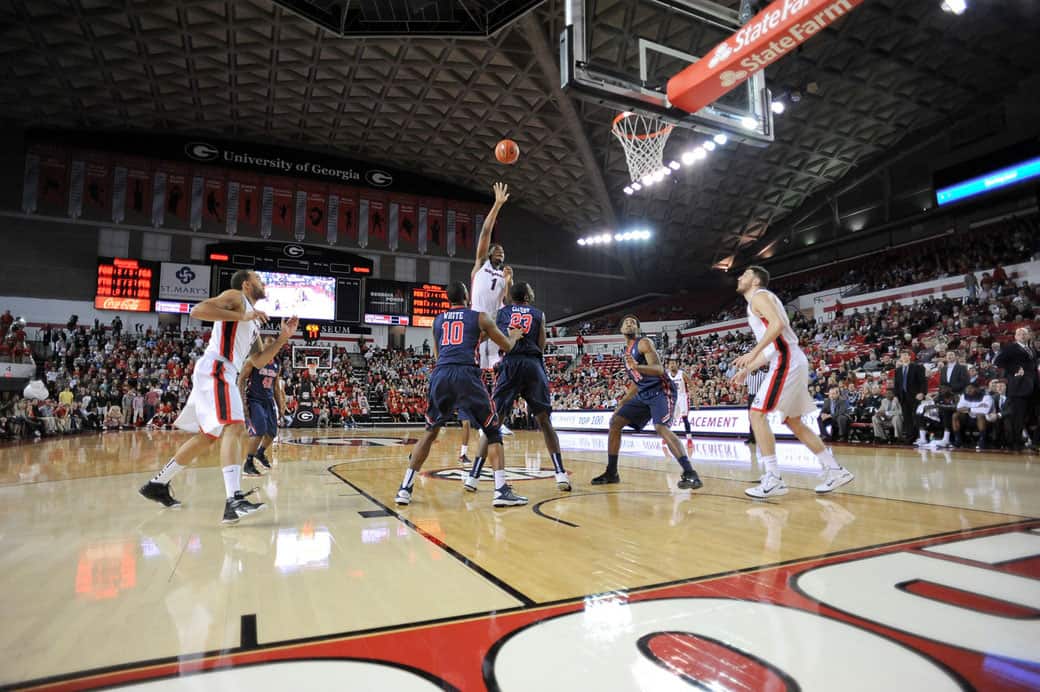 ATHENS, Ga. – The Georgia Bulldogs outscored Ole Miss 44-33 in the second half to overcome a six-point halftime deficit and defeat the Rebels 69-64 at Stegeman Coliseum on Tuesday night.

Charles Mann scored all 12 of his points in the second half, finishing with seven rebounds and two assists, while Marcus Thornton led the Bulldogs with 16 points. Nemanja Djurisic and J.J. Frazier each ended up with 11 points, and Cameron Forte contributed nine points off the bench on 3-of-4 shooting from the field and the free throw stripe.

“That was just a hard-fought SEC game,” Georgia head coach Mark Fox said after the game. “There are just so many wars in this league. Ole Miss has a really good basketball team and we anticipated that this would be a real slugfest. They have a terrific team and they forced us to play poorly in the first half. Give them credit. Obviously Charles [Mann] gets the two fouls and we just kind of hung in there and then found a rhythm to start the second half and end the night with a really good win because we beat a really good team.”

Georgia’s two-game hot streak from the field came to a screeching halt in the first half of Tuesday’s contest, as the Bulldogs connected on just 33 percent of their field goal attempts and went 0-for-7 from 3-point range. Thornton was one of the lone bright spots for Georgia in the opening period, scoring 11 points and adding four rebounds, two blocks and one assist.

Ole Miss out-rebounded the Bulldogs 22-to-15 in the first half, allowing the Rebels to take a 31-25 lead into the locker room at the half despite committing 10 team fouls.

The Bulldogs opened the second half on a 15-8 run to take a 40-39 lead, knocking down 7-of-11 field goal attempts in the first five minutes. Georgia hit just eight field goals in the entire first half.

Georgia opened up its largest lead of the game on a breakaway dunk by Thornton at the 8:16 mark, putting the Bulldogs ahead 51-44. The Rebels tied the game quickly, however, as Stefan Moody knocked down three quick free throws before both Jarvis Summers and Sebastian Saiz hit jumpers to tie the game.

Frazier hit two 3-pointers on two of the Bulldogs next three possessions, then Kenny Gaines found Djurisic for a fast break dunk to put Georgia back up by six with 3:36 remaining. Moody scored five more unanswered to bring the Rebels back to within one, but the Bulldogs hit eight free throws, including their final seven attempts, in the last two minutes to close out the game.

Moody led all scorers with 26 points on 7-of-16 shooting and was 10-of-10 from the free throw line, yet just 2-of-9 from 3-point range. Saiz fouled out late in the game but finished with a game-high 10 rebounds and nine points for the Rebels.

· This was the 110th all-time meeting between the Bulldogs and the Rebels. Georgia leads the series 69-41 and has now won each of the last four meetings.

· This was Georgia’s third consecutive win in conference play since losing to LSU in double overtime on January 10 in Baton Rouge.

· Georgia had not trailed since losing to LSU on January 10. They led wire-to-wire against both Vanderbilt and Florida entering Tuesday’s contest against Ole Miss. The Bulldogs trailed the Rebels for 11:38 of the first half.

· After connecting on 16 of their last 31 three-point attempts dating back to the second half of the Vanderbilt game, Georgia was 0-for-7 from beyond the arc in the first half against Ole Miss.

· Georgia connected on seven of its first 11 field goal attempts in the second half after making just eight field goals in the entire first half. The Bulldogs equaled their first half total at the 12:43 mark on a Kenny Gaines 3-pointer.

· Cameron Forte recorded set career highs in steals (two) and free throws made (three) off the bench. He also had a season-high two assists.

· This was Mark Fox’s 97th victory as the head coach at UGA, and the 220th of his coaching career.

Georgia will head to Starkville to take on Mississippi State in the only matchup between the schools this year on Saturday, January 24. Tipoff is set for 3:00 p.m. eastern and the game will be televised on FSN. The Bulldogs will then return home for a midweek contest with Vanderbilt on Tuesday, January 27. Georgia took the first meeting of 2015 by a final score of 70-67 in Nashville on January 14.