Georgia Bulldogs in the "Way Too Early" 2015 Top 25 rankings

Georgia Bulldogs in the “Way Too Early” 2015 Top 25 rankings 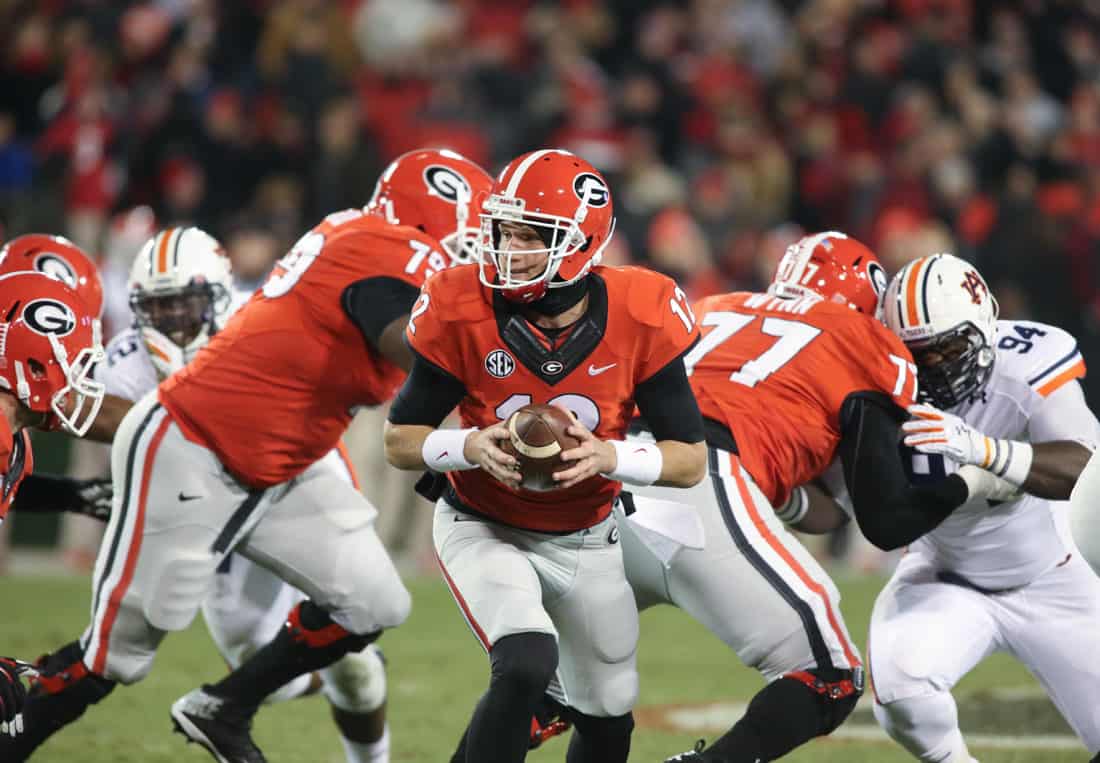 It happens every season. Just after the completion of the National Championship Game, sports sites and blogs release their “Way Too Early” Top 25 rankings for the following season.

Georgia finished the 2014 season ranked 9th in both polls. Heading into the 2015 season, the Dawgs will have to replace starting quarterback Hutson Mason, center David Andrews, running back Todd Gurley, and wide receivers Chris Conley and Michael Bennett.

But the Dawgs return a stable of running backs, including Nick Chubb, Sony Michel, and a healthier Keith Marshall. Add to that a likely Top 5 recruiting class, and Georgia should be good again but it could depend on quarterback play.

With that in mind, lets take a look at where the Georgia Bulldogs stand in the “Way Too Early” 2015 rankings from several sources.

Georgia should be the clear SEC East conch holder on paper. They should every year. But, the perpetual question is whether Mark Richt will translate that paper advantage to wins. Georgia’s defense gets a second year under Jeremy Pruitt. Nick Chubb is back for more as a sophomore. Despite the quarterback departure, the raw material is there. Fingers crossed as we head into silly arrest season.

Why they might finish higher: Georgia brings back four of five starters on the offensive line, as well as tailback Nick Chubb, who ran for 1,547 yards with 14 touchdowns as a freshman (after getting only 31 carries combined in the first five games). Georgia’s defense improved dramatically under first-year coordinator Jeremy Pruitt, and linebackers Leonard Floyd, Jordan Jenkins and Lorenzo Carter are coming back. Georgia’s schedule includes only four true road games and only two (at Vanderbilt and Tennessee) in the first two months of the season.

Why they might finish lower: Georgia is going to have to find a new quarterback to replace Mason, who was solid yet unspectacular in his only season as a starter. Brice Ramsey, Jacob Park and Faton Bauta will battle for the job this spring. Will the Bulldogs be as explosive on offense without former coordinator Mike Bobo, who left to become Colorado State’s head coach? The Bulldogs hired former NFL assistant Brian Schottenheimer to take over the offense.

The third team from the SEC, and the team that should have performed better than it did the last three seasons. The Dawgs are loaded on offense (remember that guy named Chubb?), and are fast and athletic on defense. The only question is who plays quarterback (Brice Ramsey, Jacob Park or someone else) — and how does he mesh with new OC Brian Schottenheimer? Here’s your partial answer: the new QB can’t be any less effective than Hutson Mason.

With Florida dealing with a coaching transition and South Carolina having question marks on both sides of the ball, Georgia and Missouri should enter the spring as the favorites in the SEC East. The Bulldogs have their share of holes to fill, starting on offense where quarterback Hutson Mason, receiver Michael Bennett and center David Andrews will expire their eligibility after the Belk Bowl. Replacing a starting quarterback is never easy, and coach Mark Richt will be working with a new coordinator after Mike Bobo left for Colorado State. Running back Nick Chubb will be one of the best in the SEC next season. Coordinator Jeremy Pruitt made an impact in his first season as the defensive signal-caller in Athens, as Georgia lowered its yards per play allowed to 4.8 after giving up 5.4 in 2013. Pruitt should continue to mold the Bulldogs’ defense into one of the best in SEC next season but standout linebackers Ramik Wilson and Amarlo Herrera must be replaced. The secondary was considered the biggest weakness for Georgia this year and should show improvement in 2015 with only one player expected to depart (Damian Swann) from the Belk Bowl two-deep. The Bulldogs play Auburn and Alabama in crossover games with the SEC West next season.

Last season’s crop of freshmen running backs was one of the best ever, and Chubb might have been the ring-leader as the sensational replacement for Todd Gurley. He’ll be leaned on heavily, but the defense has enough pieces to make a serious run in the SEC East.

Why No. 14? Because the defense will improve in its second season under coordinator Jeremy Pruitt. That’s a big deal: Georgia needs more consistency on this side of the ball to win not just the SEC East Division but the conference as a whole. At the same time, the offense has identified a leader in sophomore running back Nick Chubb, the engine behind the Bulldogs’ attack. Look for Georgia to be physical on offense and aggressive on defense; that formula, when combined with the division’s highest level of talent, makes this team the favorite to reach the conference title game.

The Dawgs have some rebuilding to do on offense, starting with a new quarterback, but RB Nick Chubb could be a Heisman contender. Meanwhile, defensive coordinator Jeremy Pruitt will have a bevy of talent on his hands with the likes of LBs Leonard Floyd, Jordan Jenkins and Lorenzo Carter.

Do the Bulldogs even need a quarterback? They have so much depth at tailback they could go to the single wing. Nick Chubb leads the way.