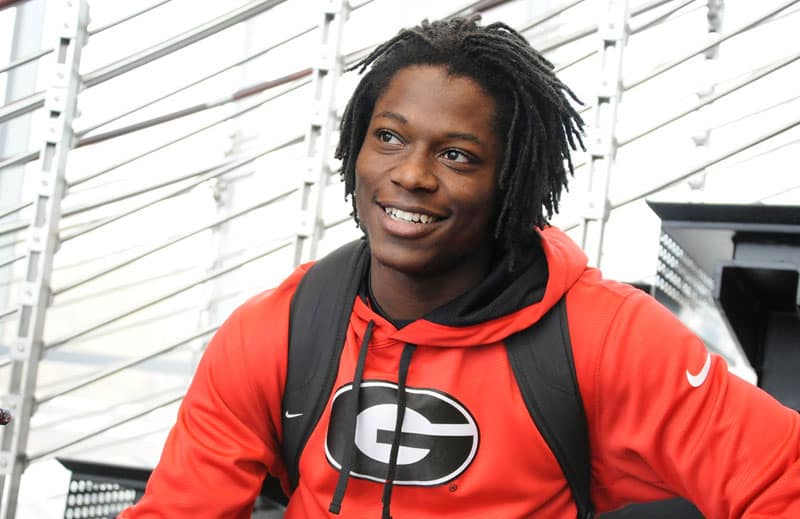 ATHENS, Ga. – Two Bulldogs have each captured one of the six Southeastern Conference individual player awards, according to a league announcement on Wednesday.

True freshman tailback Nick Chubb was named the SEC Freshman of the Year after also earning similar honors from the Associated Press earlier this week. Chubb was also a First Team selection for the SEC Coaches and the AP.

Chubb, a native of Cedartown, Ga., has shredded opposing defenses for 1,281 yards and 12 touchdowns on 186 carries (6.9 average) in his first season. He became the 12th Bulldog in history to reach 1,000 yards rushing in a single season and is currently No. 10 on the all-time list. Chubb, who also has 18 catches for 213 yards and a pair of scores, is second in the SEC in rushing yards per game (106.8).

Conley, a native of Dallas, Ga., has compiled a 3.0 or better GPA in each of his 11 academic terms at UGA, including two terms on the Dean’s List. He sports a 3.32 cumulative GPA and is on track to receive his Bachelor’s degree in Journalism in December.
He has been named one of 10 finalists for the 2014 Senior CLASS Award and was named to the SEC Community Service Team and to the American Football Coaches Association (AFCA) Allstate AFCA Good Works Team. Conley was one of 12 finalists for the Wuerffel Trophy and a semifinalist for the Wooden Citizenship Cup.
Conley has led Georgia with 577 receiving yards and seven touchdowns in 2014 and trails only Michael Bennett with 32 catches for the Bulldogs. For his career, Conley is ranked fifth in school history with 19 touchdowns to go with 113 receptions for 1,858 yards in 48 games.

In addition to Murray last year, Conley joins David Green (2004) as the only three Bulldogs named the SEC Scholar-Athlete of the Year.