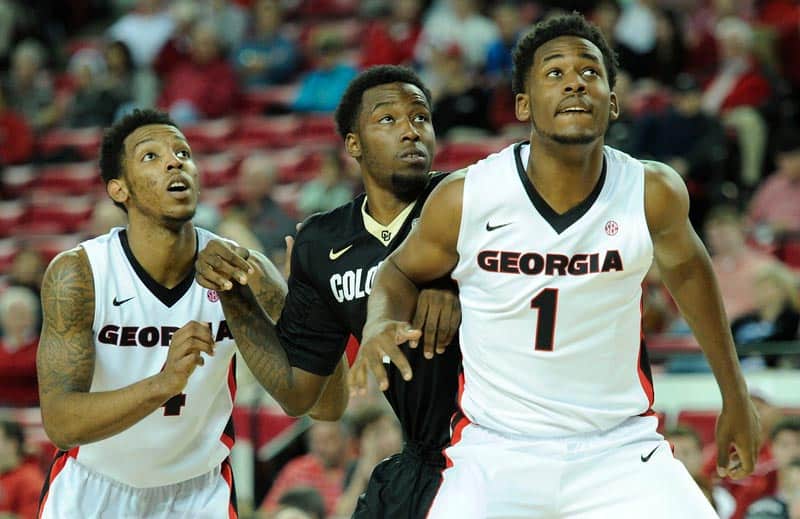 ATHENS, Ga. – Sophomore guard J.J. Frazier tied a career high with 15 points, 12 of which came in the second half, as Georgia defeated Colorado 64-57 at Stegeman Coliseum on Sunday December 7.

Frazier did not miss a shot in the game, connecting on all three of his field goal attempts (all three-pointers) and all six of his free throw attempts. As a team, the Bulldogs shot 43.8 percent from beyond the arc, their second best performance of the season.

“That’s a [postseason] resume win,” Georgia head coach Mark Fox said after the win. “There’s no way around it. And to be honest with you, it’s the first time in a long time that we’ve had a resume opportunity here at home. I think that was a big part of it. They [Colorado] are very good. They’re a tournament team who will finish very high in the PAC-12 so it was a good win for us.”

The Bulldogs closed out the first half on a 12-0 run over the final four minutes to take a 34-22 lead into the locker room. A Thornton tip-in started the run after a 3-pointer by Colorado’s Xavier Johnson, which proved to be the Buffaloes’ final field goal of the half.

“We had some timely three point shooting and we got stops,” Coach Fox added. “I thought early in the game we had some turnovers that led to some baskets for them, but once we kind of got used to the battle and took care of the ball we were able to finish some plays there and give us a lead going into the half.”

Both teams struggled at the start of the second half, scoring just seven collective points over the first 7:30. Colorado’s Askia Booker and Josh Scott led a comeback attempt for the Buffaloes down the stretch, battling to within six with 1:07 remaining. Frazier and Parker were able to close the game out for the Bulldogs as the two combined for seven free throw makes within the final 1:06 to seal the win.

Booker led Colorado (5-2) with 20 points on 7-of-19 shooting; Scott added 18 points and 11 rebounds for his third double-double of the season. Johnson tallied 10 points and was 2-of-7 from beyond the arc.

· This was the tenth meeting between the Bulldogs and the Buffaloes. Georgia leads the overall series 7-3. Colorado had won the two previous meetings between the schools.

· Georgia is now 4-0 on the season when playing at Stegeman Coliseum.

· Georgia seized the lead with 3:46 remaining in the first half and held the lead until the final buzzer, leading for a total of 29:45.

· Juwan Parker attempted a career-high 10 field goals, connecting on three of them and finishing with a season-high 10 points.

· Parker also tied a season high in free throws made, going 4-of-6 from the stripe.

Georgia will have two weeks off for final exams but they will resume action on December 21 when the Bulldogs play host to Seton Hall at 6:00 p.m. at Stegeman Coliseum. The game will be televised on ESPNU.