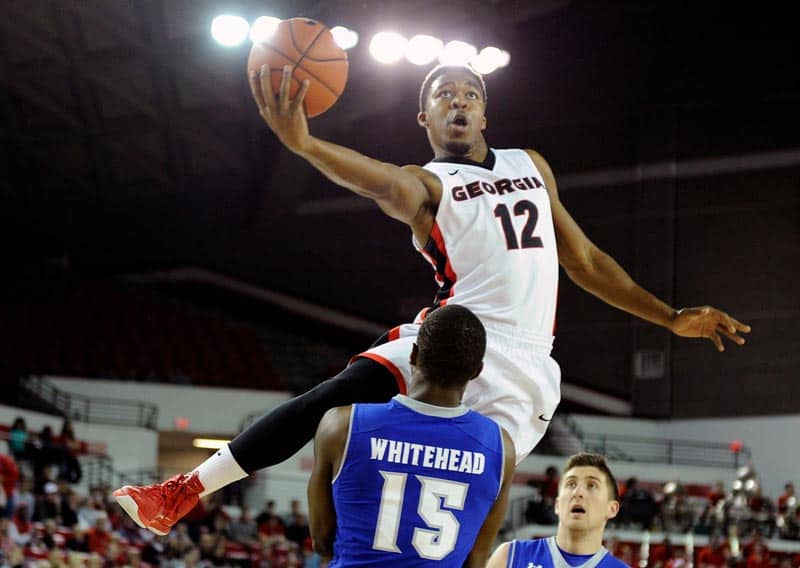 ATHENS, Ga. – The Georgia Bulldogs rolled over Seton Hall, leading wire-to-wire on their way to a 65-47 victory on Sunday, December 21 at Stegeman Coliseum.

Georgia (6-3) had its best defensive outing of the season, holding Seton Hall (9-2) to a season-low 47 points. It was also the fewest points the Bulldogs have allowed since holding Mississippi State to 45 on March 5 of last season.

Sophomore J.J. Frazier posted career highs in rebounds (11), assists (7) and steals (3) off the bench for the Bulldogs. Junior Kenny Gaines led all scorers with 15 points on 5-of-8 shooting. Senior Marcus Thornton finished the night with 13 points and eight rebounds.

“Just really a hard-fought game by our team,” Georgia head coach Mark Fox said following the game. “We had tremendous respect for Seton Hall coming in. I think they have a terrific team. We played terrific defense. I think our defense and rebounding won us the game and we have tremendous respect for Seton Hall. They’re a terrific team. I thought over the two-week break, ‘I’m glad we’re playing a really good team,’ because it forced our guys to be on point when the game started. I was really pleased with our defense.”

Georgia dominated the entire first half, holding Seton Hall to a season-low 22 points in the first half. The Bulldogs registered nine assists on 13 first-half field goals and out-rebounded the Pirates 27-to-17 in the opening period. Seton Hall committed 14 total fouls in the first half which Georgia converted into 11 points on 19 attempts from the free throw line. The Bulldogs closed out the half on a 14-4 run to take a 41-22 lead into the locker room.

The Pirates did not have a player score in the double digits. Brandon Mobley, Khadeen Carrington and Desi Rodriguez tied for the team lead with eight points each. As a team, Seton hall shot just 29.6 percent from the field, including just 3-for-20 from beyond the arc. Entering the day, the Pirates led the Big East in 3-point field goal percentage averaging 41.7 percent per contest.

· This was the first-ever meeting between Georgia and Seton Hall. Georgia is now 6-9 all-time against the current members of the Big East Conference.

· Georgia had a 14-day gap between games before Sunday’s contest, the longest layoff in 21 years for the program.

· Georgia held Seton Hall to a season-low in points scored (47). Their previous low was 58 against George Washington on Sept. 29.
· Seton Hall entered the matchup ranked first in the Big East in 3-point shooting (41.7 percent), but hit just 3-of-20 attempts (15 percent).

Georgia will return to action on December 27 as they play host to Mercer. Tipoff is scheduled for 6 p.m. and the game will be televised on the SEC Network.