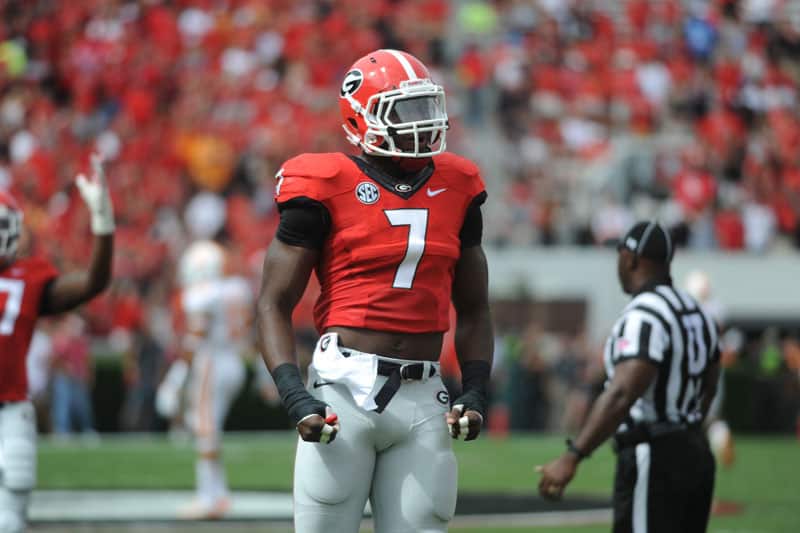 ATHENS, Ga. – Georgia shares the Southeastern Conference lead with three players on the Freshman All-SEC Team, according to a league announcement on Thursday.

Tailback Nick Chubb, tight end Jeb Blazevich and outside linebacker Lorenzo Carter were the Bulldog representatives. Alabama, Tennessee and LSU also had three players on the first-year squad. This marks the most Bulldogs on the Freshman All-SEC Team since Aaron Murray, Kwame Geathers and Alec Ogletree were named to the 2010 squad.

Chubb has already been named the Coaches and Associated Press SEC Freshman of the Year and was a First Team selection for both teams. A native of Cedartown, Ga., Chubb has shredded opposing defenses for 1,281 yards and 12 touchdowns on 186 carries (6.9 average) in his first season. He became the 12th Bulldog in history to reach 1,000 yards rushing in a single season and is currently No. 10 on the all-time list. Chubb, who also has 18 catches for 213 yards and a pair of scores, is second in the SEC in rushing yards per game (106.8).

Blazevich, a native of Charlotte, N.C., has played in all 12 games, starting the last 10. He has 16 catches for 256 yards and two touchdowns. Blazevich, who has helped Georgia post the nation’s eighth-best scoring offense at 41.7 points a game, hauled in the team’s longest pass of the year at 50 yards from tailback Todd Gurley.

Starting the last four contests, Carter, a native of Norcross, Ga., has 33 tackles this season, including six tackles for loss and 3.5 sacks. Carter also has one of the Bulldogs’ 13 fumble recoveries on the year. The 6-6, 237-pounder earned SEC Defensive Lineman of the Week honors after he responded to his first start with a career-high nine tackles in the win at Kentucky.

Bulldogs on the 2014 Freshman All-SEC Team