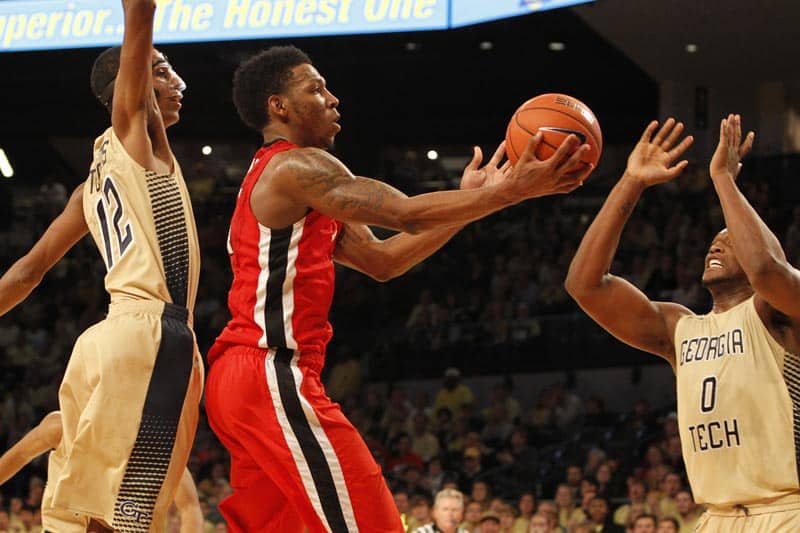 ATLANTA, GA – Georgia Tech sank six free throws in the final minute to secure an 80-73 win over Georgia in the season opener for both teams here Friday.

The Bulldogs (0-1) pulled to within three on a J.J. Frazier layup with 34 seconds left, but couldn’t get closer in what was the first matchup between the two rivals in a season-opener.

“I thought we started very impatiently in the first half,” said head coach Mark Fox. “Give them credit defensively. We settled for three point shots and could not calm down. We played from behind all night. Give Tech credit, but I was disappointed in how we started the game.”

Georgia had three players in double figures, led by Nemi Djurisic with 18, while Marcus Thornton added 12 and Kenny Gaines came off the bench to score 11. Quinton Stephens paced Georgia Tech with 22 points, and Charles Mitchell had 20.

Georgia shot 25 percent (5-for-20) from three point range, including 4-for-16 in the first half. The Bulldogs shot 56 percent from the field in the second half.

“We shot a good percentage in the second half, but it just took us a long time to relax,” Fox said. “We made an effort in the second half to go inside, but it’s tough to dig that kind of a hole and fight your way out of it.”

A Thornton jumper cut the deficit to 50-46 five minutes into the second half, but Georgia couldn’t get closer until Frazier’s layup with less than a minute to go.

Georgia returns to action for its home opener Tuesday at 7 p.m. against Stony Brook, which is part of the NIT Season Tip-Off.