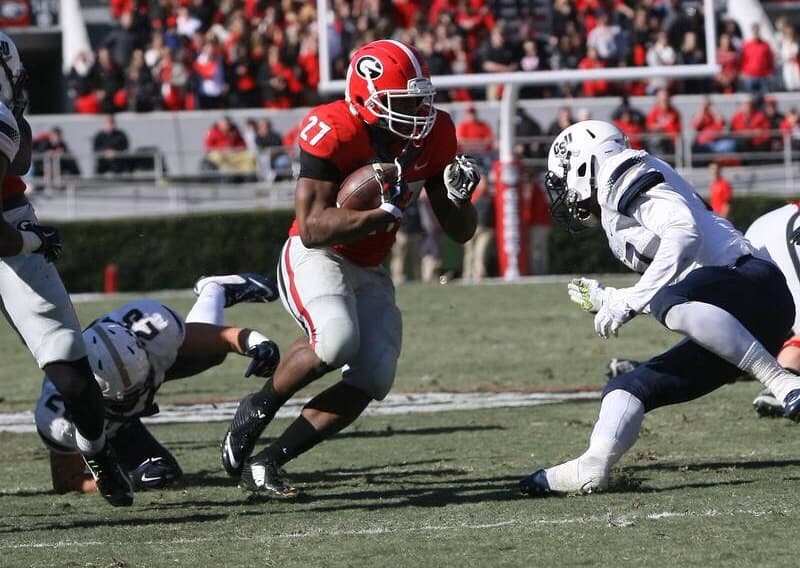 ATHENS, Ga. – Georgia freshman tailback Nick Chubb has been named the Southeastern Conference Freshman Player of the Week for the fifth time following the Bulldogs’ 55-9 victory over Charleston Southern, according to a league announcement.

Chubb, a tailback from Cedartown, Ga., ran for 113 yards on only nine carries (12.6 average) and scored twice in just two quarters against the Buccaneers. His performance included an 83-yard touchdown run, which is the eighth longest scoring run in school history and third longest in Sanford Stadium for the Bulldogs. Currently, he is second in the SEC in both yards per game (104.7) and total rushing yards (1,152) in 2014.

Chubb has started the last six games and has 928 yards on 130 carries (7.1 average) and nine rushing touchdowns in that span. He is the first Bulldog to rush for at least 100 yards in six consecutive contests since Herschel Walker had 11 in a row, counting the Sugar Bowl, as a junior in 1982. Walker had only four in a row (eight total counting the bowl game) as a freshman in 1980 before surpassing the 100-yard mark in all 11 regular season games of the 1981 season as a sophomore.

This year, Chubb became the 12th Bulldog in school history to rush for more than 1,000 yards in a season and first freshman to accomplish the feat since Todd Gurley in 2012 (1,385). The Bulldogs have gone 5-1 during Chubb’s starting streak, including beating #23 Missouri and #9 Auburn by a combined score of 68-7.