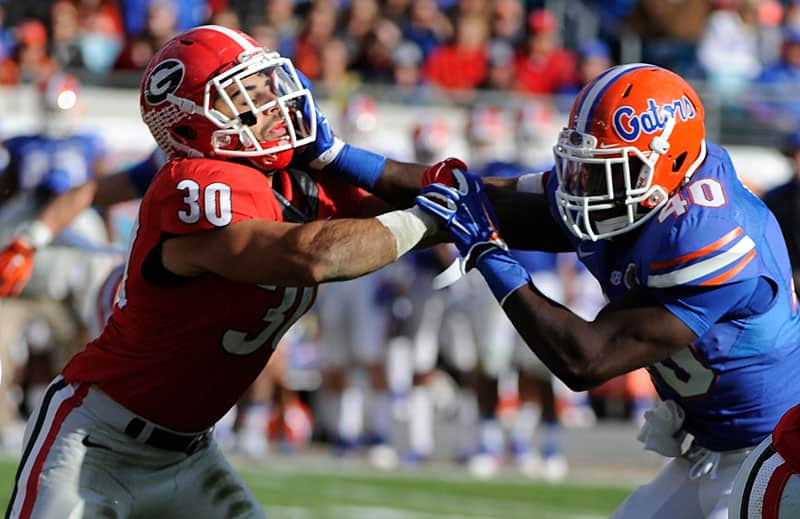 ATHENS, Ga. – The No. 9 Georgia football team dropped a 38-20 game to the Florida Gators on Saturday, November 1, 2014 in front of 83,004 fans and a CBS nationally televised audience at EverBank Field in Jacksonville, Fla. The Bulldogs are now 6-2 on the year and 4-2 in Southeastern Conference actions. Florida is 4-3 overall and 3-3 in the SEC.

Defensively, the Bulldogs were led by Amarlo Herrera, who finished with 11 tackles, including four solo stops and 1.5 tackles for loss. Leonard Floyd faded nine tackles, while Jordan Jenkins tacked on eight.

Georgia scored first, taking a 7-0 lead on a nine play, 85-yard drive that took 2:43. Chubb carried the load before taking the ball 39 yards to the end zone for the score.

The Bulldogs looked to add to its lead after Jordan Jenkins recovered a fumble at the Florida 48. The Bulldogs were able take the ball down to the 22-yard line, but the windy conditions came into play as Marshall Morgan was unable to connect on a 22-yard field goal. During the drive, Chubb went over 100 yards for the third time of the season. He finished with 101 in the first quarter.

The Gators answered on the next drive, scoring on a fake field goal with 8:25 on the clock that made it a 7-7 game. After a three-and-out by Georgia, Florida scored on its next drive, going 64 yards in five plays. A 44-yard run set up the two-yard touchdown run that made it a 14-7 lead after the extra point.

Florida scored the next 10 points of the game. The Gators put together a 6-play, 73-yard touchdown drive on the opening possession of the second half. The touchdown was scored on a 44-yard run that put Florida up 21-7 after the extra point. The Gators added a field goal on their next drive that extended their lead to 24-7.

The Bulldogs looked to answer on the ensuing drive, completing a slant pass to Malcolm Mitchell for 11 yards. Chubb broke off a 35 yard run, but the ball was stripped from behind, forcing a fumble that was recovered by the Gators. The turnover didn’t hurt the Bulldogs as the defense forced and 3-and-out and the Gators to punt.

Georgia was unable to find an offensive rhythm and had to punt on the next possession. Florida returned the punt 38 yards to the Georgia 26. The Gators scored five plays later to make it a 31-7 game.

The Bulldogs responded with a nine-play, 68-yard touchdown drive. Chubb started the drive with a fouyard gain. Mason found Bennett on a slant for a 12-yard gain. Three plays later Mason and Chubb connected for 15 yards and a first down at the UF37. On second down, Mason completed a 10-yard touchdown pass to Chubb. Georgia went for two after the play, but was unable to convert, resulting in a 31-13 game.

Georgia put together an 11-play, 68-yard drive that saw it work its way down to the Florida two-yard line. Georgia went for it on fourth down, but the pass was deflected, allowing Florida to get the ball back at its own 2-yard line.

On the ensuing drive, Florida tacked on a touchdown that gave them a 38-13 lead. The touchdown was scored on a 65 yard run by Kelvin Taylor.

The Bulldogs added a touchdown with three seconds left in the game. Mason took to the air, completing passes of 25 and 24 to Chris Conley and Davis before Brendan Douglas ran for the one-yard touchdown run that cut the lead to 38-20.

Georgia returns to action next Saturday, November 8 when it travels to Lexington, Ky., to take on the Kentucky Wildcats. The game will kickoff at noon ET and be televised on ESPN.

Chubb Carries The Load: Freshman TB Nick Chubb scampered for a 39-yard touchdown run in the opening period to put Georgia up 7-0 at the 9:02 mark. It was the longest rushing played allowed by Florida this year and just the sixth rushing TD it has allowed. The score came on an 85-yard drive that took only 2:43 on nine plays. Chubb finished with 156 yards on 21 carries (7.4 avg.) and his sixth rushing touchdown and finished with a career-high five catches for 59 yards and his second career receiving touchdown (20-yard touchdown versus Tennessee). He had 101 yards on 14 carries and a score in the first quarter alone.

Mason Forced To Air It Out: Senior QB Hutson Mason had career-highs in attempts and completions, going 25-for-41 for 314 yards and one TD. His leading receiver was junior Malcolm Mitchell with seven catches for 55 yards while senior Michael Bennett had six for 60 yards.

Series Update: After today’s 38-20 loss, the Bulldogs lead the series 50-41-2 and saw their three-game winning streak in the series end. In Jacksonville, Georgia holds a 43-38-1 advantage. Today, both teams wore their traditional dark jerseys, which was the first time they did that since 1970.

Rushing Defense: Coming in today, Georgia ranked second in the SEC in rushing defense, allowing just 105.1 yards a game. Florida rushed 60 times for 418 yards, and that’s the second most ever against the Bulldogs, trailing only Auburn’s 430 yards on 63 attempts in 1978. UF had just 27 passing yards, going 3-for-6 today.

Points Off Turnovers And Rare Fumble: The Bulldogs now have a +13 turnover margin and have scored 55 points off 18 turnovers while opponents have tallied three points off five Bulldog miscues. Junior OLB Jordan Jenkins jumped on a Gator fumble late in the first quarter. This was Jenkins’ second fumble recovery this year. Georgia missed a 39-yard field goal on the next drive.
Nick Chubb fumbled after a 35-yard run and Florida recovered it. This was Georgia’s only second lost fumble of the year. The Gators went 3-and-out on the next possession. This was the first fumble lost by a Georgia RB since Brendan Douglas had one against Missouri in 2013. The Bulldogs had 521 carries between their last fumbles on a rushing play (QB-Aaron Murray, Florida, 2013 until Chubb’s fumble today).

Starters: Junior receiver Malcolm Mitchell started his first game this season and first since the 2013 season opener at Clemson where he sustained an ACL injury. He was the team’s leading receiver today with seven catches for 55 yards. Mitchell has played in four games this year. Senior C David Andrews made his team-leading 34th consecutive start.

Defensive lineman Mike Thornton
“I know we’ve got to get it together next week. We’ve got another one to play. I don’t think we showed up to play. It’s a momentum game. You give them an ounce of momentum and they take it and run with it. We had to take it from them and we didn’t. We didn’t execute. They didn’t do anything that surprised us. It was us. It wasn’t them. It was things that we were doing that we could’ve done better. It’s a momentum game like I said earlier. For them to have a play like that (the fake field goal) it definitely created some momentum on their side of the ball. I definitely think we had the momentum early in the game. We just didn’t rise to the occasion like we should have.”

“Star” defensive back Damian Swann
(On did momentum change with the fake field goals)
“Maybe a few plays later. I think they got a nice shot on Isaiah on the next kickoff return and once they got going it was hard to stop them. Four hundred yards rushing and 27 yards passing is not good at all. That’s not the team that we are, and it’s not the team that we want to be. We know how good we can be and we know what we have to do. It’s just one of those games. Once momentum swings, it’s hard to get it back. We were never able to get it back.”

Quarterback Hutson Mason
“I think we played hard. There’s no doubt in my mind that we played hard. They just caught a lot a lot of momentum. Football is a game of momentum and when you’re playing behind by 20 or 21 in a rivalry game, that’s hard to come back. It just felt like we couldn’t ever get anything going. We were obviously in the game and had a chance to be up 10-0. They caught good wind and good things kept rolling for them. And one bad thing just kept rolling for us. You have to answer the bell, and I think we could’ve done a better job of that.”

Tailback Nick Chubb
“They let us play for the most part. The fake field goal got them the momentum, an exciting thing. After that, the momentum changed. I think we all played hard. The ball just didn’t bounce our way.”