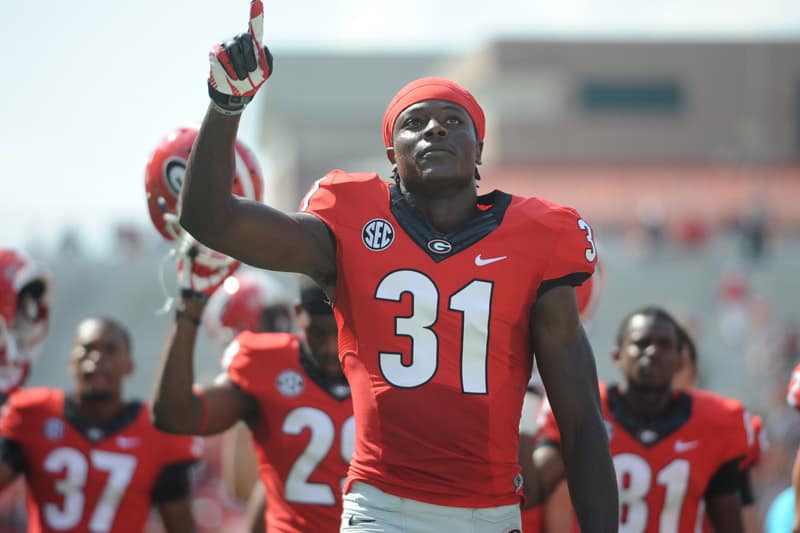 ATHENS, Ga. – Georgia senior receiver Chris Conley has been named one of 12 finalists for the Wuerffel Trophy, according to an announcement from All Sports Association on Tuesday.

Conley is one of four finalists from the Southeastern Conference for the award that honors the college football player who best combines exemplary community service with outstanding academic and athletic achievement.

The winner of the Wuerffel Trophy will be announced on December 9. The award will be presented at the All Sports Association’s annual banquet on February 13, 2015, in Fort Walton Beach, Fla.

In 2013, Bulldog quarterback Aaron Murray was named a finalist for the Wuerffel Trophy for the second consecutive year.

Conley, a 6-3, 205-pound native of Dallas, Ga., has recently been named to the SEC Community Service Team to highlight a career dotted with excellence. Earlier this fall, he was named to the American Football Coaches Association (AFCA) Allstate AFCA Good Works Team.

Conley is also one of 10 finalists for the Senior CLASS Award and a semifinalist for the Wooden Citizenship Cup. Last spring, Conley was named the Atlanta Area Council of the Boy Scouts of America’s male “Peach of an Athlete” as the state’s top student-athlete excelling in academics, athletics and community service. In addition, he won the UGA Athletic Association’s Sportsmanship & Ethics Award for 2013, encompassing UGA’s 600 student-athletes in 21 different sports.

The North Paulding High School graduate has demonstrated his leadership both on campus in Athens and nationally with the SEC and NCAA. Conley served as a football team representative on the UGA Student-Athlete Advisory Committee (SAAC). He was also selected as the SEC representative to serve a two-year term on the NCAA SAAC Committee and was inducted into UGA’s Student-Athlete Leadership Academy known as L.E.A.D. (Leadership Education and Development).
Conley has compiled a 3.0 or better GPA in each of his 11 academic terms at UGA, including two terms on the Dean’s List. He sports a 3.32 cumulative GPA and is on track to receive his Bachelor’s degree in Journalism in December 2014.
On the field, Conley developed into one of Murray’s favorite targets from 2011-13 and is now one of Hutson Mason’s top receivers, leading the Bulldogs with 443 yards this season. Conley is second on the team with 25 catches and has a team leading five touchdown catches. He is averaging 49.2 yards per game for an offense that is rushing for more than 256 yards a game this year.

In the Bulldogs’ most recent victory at Kentucky, Conley snagged three catches for 58 yards and a pair of touchdowns.

Conley has 106 catches for 1,724 yards and 17 touchdowns during his career. His 17 scoring grabs is tied for sixth all-time in school history.

The Wuerffel Trophy is named after former Heisman Trophy winner Danny Wuerffel, who led Florida to the 1996 national championship, played six years in the NFL and has received national recognition for his humanitarian and community service efforts with Desire Street Ministries in New Orleans and around the country.