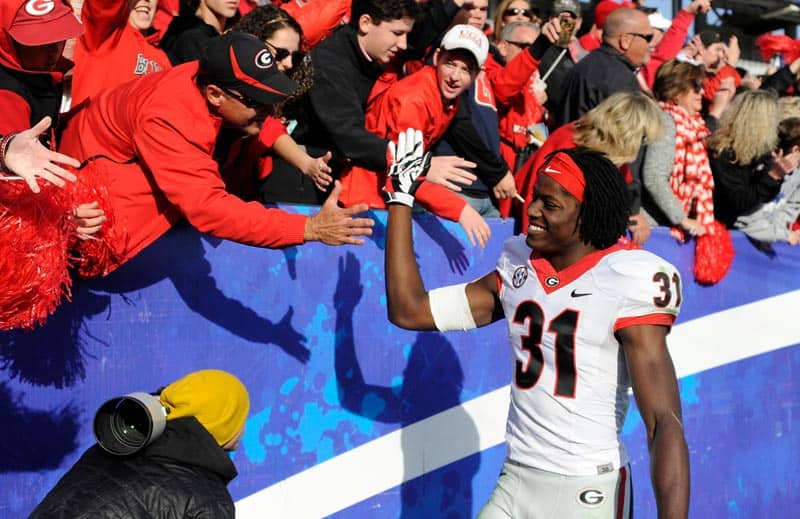 It was another big day in college football this past weekend as four of the top 10 ranked teams in the College Football Playoff Rankings fell in defeat. While plenty would still need to happen for a two-loss team to make it into the playoffs, it is not out of the question.

As a result, while slim, the Georgia Bulldogs are still in the playoff hunt. However, if they were to survey those in the media, only the SEC West would have a two-loss team worthy of a shot in the playoffs.

In this article, I am going to list five reasons the Bulldogs should be in the College Football Playoffs if they win out.

1. They would be the champions of the toughest conference in the NCAA

While many claim there is an SEC-bias, few argue that the SEC is college footballs toughest conference. It only seems logical that the top team, of the top conference in college football, should be one of the four teams selected for the playoffs.

2. They could have as many as five quality wins

If Georgia wins out, that will mean they have wins over Clemson, Missouri, Auburn, Georgia Tech, and the SEC West champion. It is not out of the realm of possibility that all five teams could be ranked in the Top 25 at that time.

It is also possible that the Bulldogs would have played ten teams who made it to a bowl game. While many have been critical of the East division compared to the West, that is still impressive.

3. Their losses are bad but not as bad as they seem

Losing to Florida and South Carolina this year was bad. However, a few factors should be taken into consideration. The South Carolina game was a rivalry game in week two that was poorly refereed and had several controversial calls. One of those was a 54-yard Todd Gurley touchdown run in the first half that was called back due to a phantom holding call on Brandon Kublanow.

The Florida game does look very bad and is hard to defend. However, two things should be taken into consideration. The Bulldogs were without two of their elite running backs in Gurley and Sony Michel.

Equally important, they were in the process of one of the toughest road stretches in college football. They had played Missouri, Arkansas and Florida in consecutive games. While those teams might not seem like world-beaters, those are three long trips without a home game.

The round trip mileage for those three games was 3,684 miles. It is not like it was three road games that were within a reasonable distance. Anyone who has ever played football will tell you, long trips are difficult. Three consecutive trips is a recipe for disaster.

4. They would have two wins against bowl-eligible Power Five conference teams

Very few teams have that on their resume, and both Clemson and Georgia Tech will have between 8-11 wins at that point in the season. If the playoff selection committee truly wants to see more marquee cross-conference matchups, rewarding Georgia would go a long way.

5. How they finish could go a long way

If everything remains the same, three of the Bulldogs final four games before the deciding playoff committee vote will be against Top 25 teams. If they win those games, leaving them out would be tough. More importantly, if they can look dominant with the return of Todd Gurley, their chances would increase even more.

They need a finish similar to 2007 where they beat three Top 25 teams by a total of 48 points in the final five games of the regular-season. Had there been a playoff that year, they would have made it and likely won the national championship.