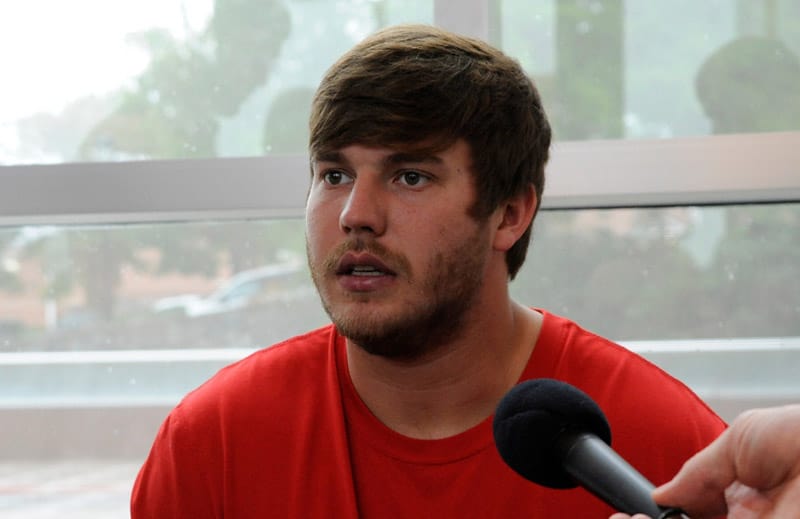 ATHENS, Ga. – The No. 17-ranked Georgia Bulldogs (6-2, 4-2) wrapped up their two-hour, full-pads practice under the lights at the Woodruff Practice Fields on Tuesday evening as they continue to prepare for this Saturday’s SEC road game at Kentucky (5-4, 2-4 SEC).

“It seemed like there was a good bit of energy today. I was pleased with that,” head coach Mark Richt said. “I thought scouts gave us a very good effort today. The weather was awesome. I like playing football under the lights, period. It reminds me of high school ball.”

On Monday, Richt announced the Bulldogs’ captains for the matchup with the Wildcats. Offensive tackle Kolton Houston will don a “C” on his jersey for the first time in his career. Houston is a fifth-year senior but is playing just his second season at Georgia. He was granted reinstatement by the NCAA in July 2013 after three years under suspension following routine NCAA drug testing detected a banned substance medically administered following a shoulder surgery in high school. Houston started six of 13 games last season and has started every contest of the 2014 season.

“Kolton has gotten better each week,” offensive line coach Will Friend. “He had those years off, but you can tell he’s getting back in the groove. He’s got to continue to improve, but he’s really played well the past couple of weeks.”

Richt met with members of the media earlier on Tuesday as well during the Bulldogs’ weekly press conference.

“They’ve got four guys with over 250 yards rushing this year which gives a lot of balance in that area,” Richt added. “It gives them a lot of healthy bodies playing ball. They’re very impressive runners, especially collectively. They’re a very explosive offense. They’ve had 16 plays of 40 yards plus. That’s ninth in the nation. They have an awful lot of big plays – run and pass. On defense, they’ve got six returning starters coming back. They’re second in the league in pass defense. They’re holding opponents to 371 yards per game, so they’re doing a good job there.”

Saturday’s game is slated for noon and will be televised by ESPN, with Dave Pasch calling the play-by-play, Brian Griese serving as color analyst and Tom Luginbill handling sideline reporter duties.