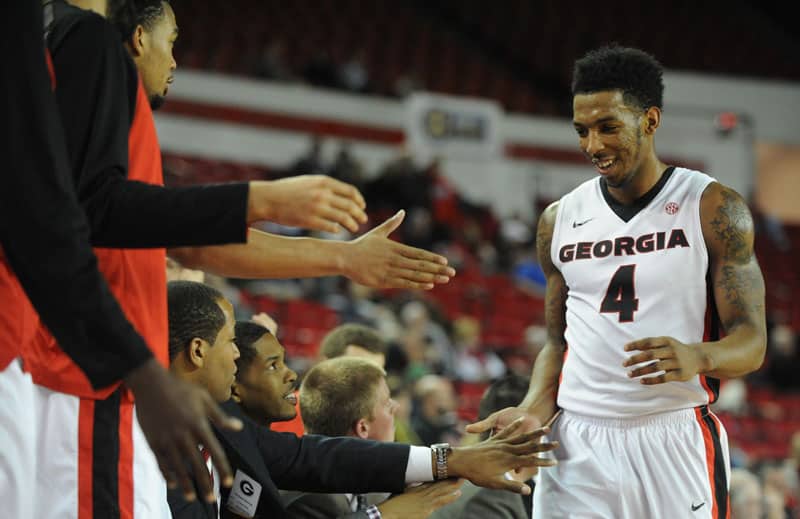 ATHENS, Ga. – Five Bulldogs scored in double digits as Georgia defeated Stony Brook 80-70 in the NIT Season Tip Off in front of a crowd of 4,787 at Stegeman Coliseum Tuesday night.

“We played with composure and poise offensively,” Coach Fox continued. “We really helped each other out tonight and were a good offensive team for most of the game.”

Georgia shot 58% from the field, including 4-of-9 from three-point range, and added 16-of-22 free throws to jump out to a 48-41 lead at the half. Defense was the story in the second half, however, as the Bulldogs held Stony Brook to just nine points through the first 15 minutes of the second half. The Bulldogs extended their lead to 75-55 during that stretch.

Stony Brook saw three players foul out during the game, including it’s leading scorer. Carson Puriefoy paced the Seawolves with 21 first-half points on 8-of-11 shooting. He finished the night with a game-high, and career-high, 26 points on 8-of-15 shooting.

· This was the first ever meeting between the schools on the hardwood.

· This was just the second time in school history Georgia has faced off against a team from the America East Conference. The Bulldogs edged Vermont, 63-56, in the first round of the 2014 post-season NIT in Athens.

Georgia will play host twice this weekend as Troy comes to Stegeman Coliseum at 7 p.m. ET on Friday night, and then Florida Atlantic visits Athens at 5 p.m. ET on Sunday.