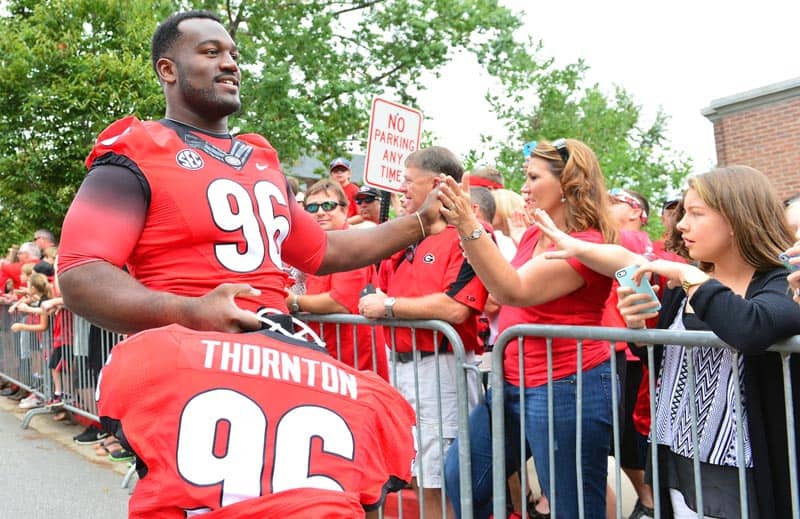 ATHENS, Ga. – The No. 9 Georgia football team returned to the Woodruff Practice Fields on Monday with a 90-minute workout in shorts and shoulder pads.

The Bulldogs (8-2, 6-2 SEC) concluded conference play last week with a 34-7 victory over Auburn. Georgia will wrap up the regular season with back-to-back non-conference games at Sanford Stadium, starting with Saturday’s contest with Charleston Southern (8-3, 3-3 Big South).

The game will kick off at noon and will be televised by the SEC Network.

Monday’s practice was held in blustery conditions, with the wind chill temperatures dipping into the 30s.

“The weather was a challenge tonight, but our guys are tough and they fought through it,” Georgia coach Mark Richt said. “I was proud of their intensity and their focus. I didn’t see anyone resting on the Auburn win. All of our efforts were on getting better and preparing for Charleston Southern. We have all the respect in the world for the Buccaneers and the job Coach (Jamey) Chadwell has done with them. We know we are facing a very good football team on Saturday.”

Richt said the captains for Saturday’s game will be center David Andrews on offense, linebacker Amarlo Herrera and lineman Mike Thornton on defense and linebacker Kosta Vavlas on special teams.

Under Richt’s direction, Georgia owns a 54-10 record against teams from outside the SEC. The Bulldogs are 38-1 at home in that span.

Georgia leads the SEC and ranks seventh nationally in scoring at 42.1 points a game. Also, the Bulldogs lead the SEC and are second nationally in turnover margin at plus-16. Georgia has scored 76 points off 22 turnovers, while opponents have managed to tally only six points off six Bulldog miscues.