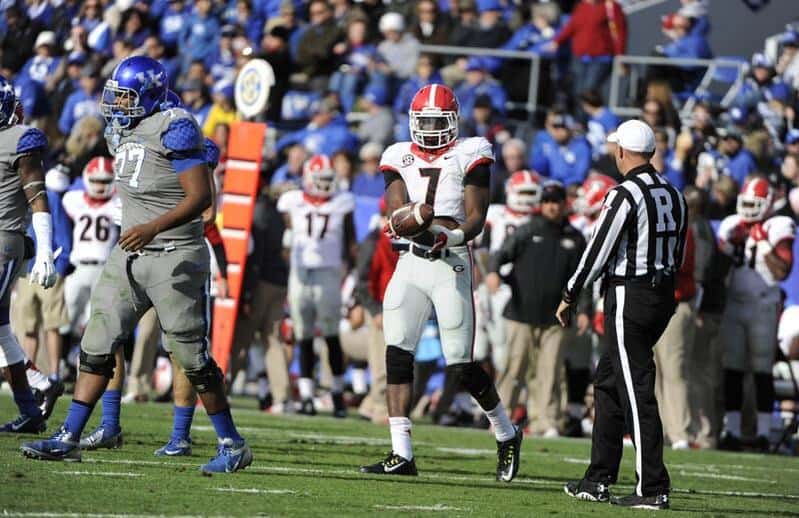 McKenzie, a receiver/return specialist from Miami, Fla., made history by becoming only the 12th player in NCAA FBS history to have a punt return and a kickoff return for touchdowns in the same game. He went 90 yards on the opening kickoff to give the Bulldogs an early 7-0 edge. McKenzie is the first Georgia player to start a game with a kickoff return for a touchdown since 1988 when Tim Worley raced 93 yards in 12 seconds against Ole Miss.

Chubb, a tailback from Cedartown, Ga., had his fourth consecutive 100-yard rushing game thanks to 170 yards, including a career long 55 yarder, on just 13 carries (13.1 avg.) and a touchdown. He finished the opening half with 116 yards and a score on seven carries (16.6 avg.) and ended up only playing three quarters.
During Gurley’s absence, Chubb has started the last four games and has 671 yards on 102 carries (6.6 yards per carry) and five rushing touchdowns.

Carter, an outside linebacker from Norcross, Ga., got his first career start against the Wildcats and responded with a career-high nine tackles, including 2.5 sacks and 3.5 tackles for loss. Carter and the rest of the starting defense played only three quarters and allowed just 285 total yards.
The No. 14 Bulldogs (7-2, 5-2 SEC) take on No. 9 Auburn (7-2, 4-2) in Athens, Ga., on Saturday, Nov. 15. ESPN will televise the game at 7:15 p.m.