Auburn at Georgia preview and predictions

Auburn at Georgia preview and predictions 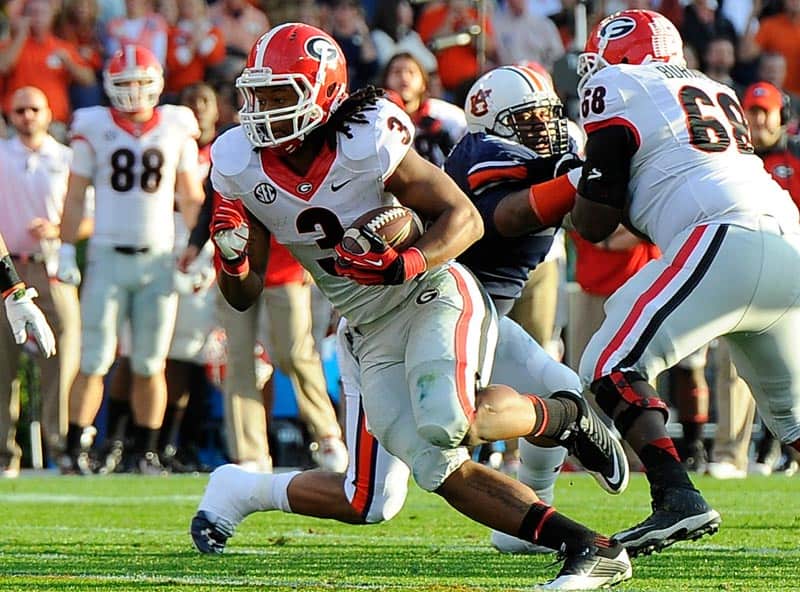 Sanford Stadium has been the home of many electric atmospheres over the years. If you’re under the age of 30, the game against LSU last season likely sits on the top of your list. However, this week against Auburn could trump them all.

This game has every imaginable story line. None are bigger than the return of college football’s best player, Todd Gurley. Not even the return of former Bulldog and current Auburn quarterback Nick Marshall.

Georgia is looking for revenge, Auburn is looking for a repeat. One will hang their heads in defeat while the other keeps their SEC championship dreams alive. There will be no moral victories, for this is the Deep South’s Oldest Rivalry.

Why Auburn Can Win This Game

If you’re expecting Georgia’s defense to stop Auburn’s offense, get over it. The Tigers will move the football and score points on any team in college football. They have already faced arguably college football’s best defense in Ole Miss and scored 35 points.

When you consider the Rebels’ starting defense has only given up four offensive touchdowns in their other nine games combined, you get a picture of how good this offense is.

Running back Cameron Artis-Payne leads the SEC in rushing with 1,190 yards on 208 carries. Despite his impressive numbers, Artis-Payne does not break many big runs. In fact, his longest of the season is 37 yards. However, he just pounds opposing defenses and gets stronger as the game goes on.

This could be a recipe for disaster as the Bulldogs have given up 632 rushing yards over the past two games. Neither of those games was in Athens, but neither of those opponents is anywhere near as potent as the Tigers offense.

Then there is Nick Marshall, who has turned into one of the nations most dangerous dual-threat quarterbacks. He is averaging 77.6 yards-per-game on the ground and only needs 113 to become Auburn’s all-time leading rusher from the quarterback position.

He has also developed as a passing quarterback as well. He has thrown for 1,576 yards (61 more than Hutson Mason) and had 25 total touchdowns to only four interceptions.

In other words, Georgia will have to play their best defensive effort of the season to keep the Tigers under 35 points.

For all of the talk of how good Auburn’s offense is, remember, it is the Bulldogs that lead the SEC in scoring despite being without Gurley in four of their games. No one in the nation has a better running back unit than Georgia and Hutson Mason is playing the best football of his career.

Freshman running back Nick Chubb has stolen all the headlines during the suspension of Gurley, but Mason has been great as well. He completed 71-of-102 for 828 yards with eight touchdowns and zero interceptions over those four games.

Mason will have to be a factor in this game as the Tigers are most vulnerable in their secondary. Although running the ball must be their first option, the Bulldogs will pick times to expose Auburn’s secondary.

The Georgia receivers are as healthy as they have been in three years, and this will be a nice compliment to the Bulldogs running game.

Georgia is only one of a handful of teams in college football that can get into a shootout and win against Auburn.

On defense, the Bulldogs are going to have to trust their secondary and commit to stopping the run. Auburn has some very talented wide receivers, but they have been inconsistent this year, especially on the road. If they can limit the big plays in the passing game, they will win this football game.

The defense looked bad over the past two weeks. However, that was one of the most difficult road stretches in recent memory. They traveled over 4,500 miles round-trip during the last four games and fatigue was an issue. This Bulldogs crowd will zap the life back into the Bulldogs defense.

In this game, I think Lorenzo Carter is the X-Factor for Georgia. Leonard Floyd is an amazing pass rusher, but this type of game is more fit for a player like Carter. He had a big game last week against Kentucky, and they will need a similar performance this week against Florida.

That is not to say the Bulldogs don’t need Floyd to play well when he is in the game; they do. However, Carter should be a more valuable weapon in this game.

As a team, it is red-zone offense. The Tigers defense ranks sixth nationally in the red zone, but the Bulldogs must be committed to touchdowns, not field goals. I have said this two other times this season, South Carolina and Florida. The Bulldogs staff didn’t follow this plan and went for field goals and the results were both defeats.

Georgia cannot win this game three points at a time. If it is 3rd and less than four, you call the series as if it is four-down territory. Mark Richt must leave the conservative game plan in his filing cabinet in his office.

How This Game Plays Out

This is a program-defining game for the Georgia Bulldogs. With the list of recruits at this game, mixed with what they already have on campus, a big win against Auburn could be the jolt they need to finish the season strong, win the SEC, and become the trendy program in the SEC.

I expect Georgia to use a short and intermediate passing game to loosen up the Auburn defense. Yes, we will see a heavy dose of Gurley, Chubb, and Sony Michel, but this will be a balanced affair.

This game will be close deep into the fourth, but Gurley will make a play that takes any remaining bad taste out of the Georgia fan bases mouth. The best players show up in the biggest moments, and none is better than Gurley.