Georgia gets up big early and wins 45-32 over Arkansas

Georgia gets up big early and wins 45-32 over Arkansas 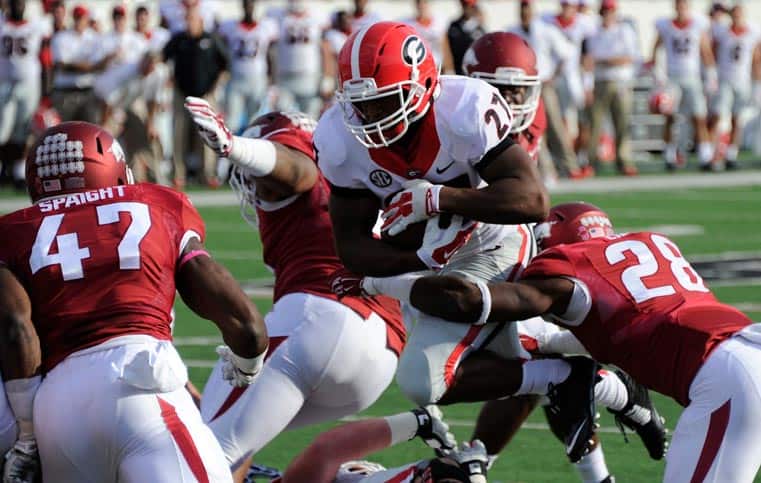 ATHENS, Ga. – Nick Chubb had his first career 200-yard rushing game as the No. 10 Georgia Bulldogs earned a 45-32 win over the Arkansas Razorbacks on Saturday, October 18, 2014 in front of 54,959 fans and a nationally televised SEC Network audience at War Memorial Stadium in Little Rock, Ark. With the win, the Bulldogs improved to 6-1 on the year and 4-1 in Southeastern Conference games. Arkansas is now 3-4 overall and 0-4 in league play.

The win marked the nation’s first win over an SEC Western Division opponent this season, as the SEC West entered the game with a 26-0 record.

Georgia got two fumbles and two interceptions from its defense today, turning them into 21 points. Georgia is now +13 in turnover margin for the year. Quincy Mauger and Damian Swann each had an interception for the Bulldogs. Ramik Wilson led the team with 14 tackles, including five solo stops. Swann had 11 tackles, eight of which were unassisted, while Amarlo Herrera and Leonard Floyd added 10 tackles each. Wilson, Swann, Floyd and Jenkins had tackles for a loss.

Arkansas scored on its opening possession, driving 75 yards on 13 plays in 7:51. The touchdown came on an 11-yard run, but Ray Drew blocked the extra point attempt, resulting in a 6-0 Razorback lead.

The Bulldogs responded with a touchdown drive of its own, going 74 yards in five plays. Highlighting the drive was a 48-yard pass from Mason to Conley that set Georgia up at the Arkansas 26. Mason then found Bennett for an 18-yard pickup that gave Georgia a first down inside the 10. Three plays later, Mason rushed into the end zone for the touchdown that gave Georgia a 7-6 lead after Marshall Morgan’s PAT was good.

Georgia attempted an on-side kick that was recovered by the Razorbacks. The Bulldog defense forced a three-and-out, including two sacks for a combined loss of 23 yards.

The Bulldogs got the ball back on their own 29 with 3:19 left in the first quarter. Conley picked up 40 yards on two catches that put Georgia at the Arkansas 14-yard line. Morgan connected on a 37-yard field goal that extended Georgia’s lead to 10-6.

Georgia tacked on seven points on its next drive, allowing it to increase the lead to 17-6. After a trio of runs by Chubb and an incomplete pass, it looked like the drive had stalled, but an unsportsmanlike conduct penalty on Arkansas gave Georgia an automatic first down. Two plays later Mason handed the ball off to Chubb, who got a block by Jeb Blazevich and took it 43 yards to the end zone for the score.

After managing just seven yards on its ensuing drive, Arkansas punted the ball away, giving Georgia good field position. Chubb rushed for 42 yards on three carries, moving the Bulldogs to the Arkansas 12-yard line. After a six-yard pass to Bennett, Arkansas was called for a personal foul, giving Georgia a fresh set of downs at the Arkansas three-yard line. Chubb finished off the drive with a touchdown run that made it a 24-6 Georgia lead.

On the first play after the kickoff, Arkansas fumbled the ball, which was recovered by Floyd at the Arkansas seven-yard line. One play later, Mason found Bennett in the end zone for six. After the Bennett touchdown, Morgan’s extra point was good, bringing the score to 31-6.

Arkansas looked to gain some momentum, driving down to the Georgia 34 yard-line. After an incomplete pass, the Razorbacks decided to go for it on fourth down. During the play, Jordan Jenkins sacked Brandon Allen, forcing a fumble that was picked up by Dominick Sanders, who returned it 54 yards for a touchdown that made it a 38-6 game after the PAT.

The Razorbacks tried to fight back into the game, moving all the way down to the Georgia 20. Allen looked to the end zone on third down, but Swann was waiting and intercepted his pass. The interception allowed Georgia to enter halftime with a 38-6 lead. The 38 points was the most first half points against an SEC team since 1984 when Georgia scored 42 points against Vanderbilt.

Arkansas scored on its first two possessions of the second half. The first touchdown came after a 12-play, 71-yard drive but a failed two-point conversion resulted in a 38-12 score. The second touchdown came on a seven play, 57-yard drive that brought the score to 38-19.

Looking to keep the momentum, Arkansas threw on third down, but Mauger was waiting and intercepted the pass. On the third play of the ensuing drive, Mason found a streaking Conley for 36 yards and the touchdown that allowed Georgia to extend its lead to 45-19.

The Razorbacks kept chipping away at the Georgia lead, scoring on a nine play, 90-yard drive that cut the lead to 45-32 after a failed two-point conversion. That would be all that Arkansas could get, as the Bulldogs kept it on the ground on the final drive of the game and ran out the clock to seal the 45-32 win.

Georgia has a bye next Saturday before facing the Florida Gators on Nov. 1 in Jacksonville, Fla. The game will be televised nationally at 3:30 p.m., on CBS.

*Another SEC Road Win: With today’s 45-32 win over Arkansas, No. 10 Georgia improves to 6-1 overall, 4-1 in the SEC. The Bulldogs lead the all-time series 10-4 over the Razorbacks including 5-0 in the state of Arkansas. This was the first meeting in Little Rock, and they are 4-0 in Fayetteville. Georgia notched the nation’s first win over an SEC Western Division team this season as that side of the conference came in 26-0 this year against non-SEC West opponents.

*Chubb Goes Over 200: Freshman Nick Chubb, making only second career start, finished with a career-high 202 yards on 30 carries with 2 TDs. In the first half, he had 12 carries for 127 yards and a career high 2 TD. His touchdown runs covered 3 and 41 yards. It marks his second straight game with at least 100 yards. He is the second Bulldog to go over 200 yards in a game this year, joining junior Todd Gurley who had 208 in the win over Tennessee.

*Mason Directs Another Road Victory: Senior QB Hutson Mason finished 10-for-17 for 179 yards and 2 TDs. In the first half, he was 7-for-12 for 127 yards and one TD. He completed a 7-yard TD to senior Michael Bennett. It was a one-play drive that took four seconds, and that was the quickest score of the season, the previous was a nine-second score against Vanderbilt. Senior Chris Conley was the leading receiver with 5 catches for 128 yards and one TD. It was his fifth career game with more than 100 yards.

*Points Off Turnovers: Georgia got two fumbles and two interceptions and turned them in to 21 points. Georgia is now +13 in turnover margin for the year. Coming in, the Bulldogs led the SEC and ranked fifth nationally with a +9 turnover margin and had converted them in to 34 points.

The first fumble was recovered by Leonard Floyd at the Razorback 7 yard line and led to a one-play TD drive. The second was caused by Jordan Jenkins and picked up Dominick Sanders and returned 54 yards for a TD. It was the third defensive TD by the Bulldogs this year. Josh Dawson had a fumble recovery in the endzone for a TD in a win over Tennessee and Devin Bowman had a 63-yard pick six against Vanderbilt. Sanders scoop and return today was the first by a Bulldog since 2010 (Justin Houston vs. Ga. Tech for 18 yards). The final forced turnover by the Bulldogs was an interception by senior Damian Swann in the endzone to thwart a scoring threat. Georgia ran one play to run out the clock. It was the ninth INT for Georgia this season. In the second half, Quincy Mauger had an interception at the Arkansas 42. It was his 3rd of the year (tied for team lead with Swann) and led to a TD.

Blocked That Kick: Senior DE Ray Drew blocked a PAT on Arkansas’ first TD. It was the first blocked PAT by the Bulldogs since 2012 when Kwame Geathers notched one versus Fla. Atlantic.

*Up Next: Georgia has an open date and then faces Florida on Nov. 1 in Jacksonville at 3:30 p.m. on CBS.

Opening statement…
“It was an outstanding victory. I’m very proud of our team. Obviously the first half was about as good as you could ever hope a first half to go. I’m very impressed with how we played in the second half. I think we still played hard, but they played better than us for a good bit of that second half. As it turned out, we had enough of an edge and we did some things right as far as special teams, our onside kick, our hands team got the ball every time and at the very end, we were able to finish with some first downs. I’m as happy as I could be with that victory.”

On Georgia’s improvement since their game vs. South Carolina…
“I think we have more confidence all the way around, but I think our defensive backfield unit is improving and obviously South Carolina executed extremely well.”

On winning without Todd Gurley…
“We heard a lot of the naysayers say we wouldn’t be anything without No. 3. We love Todd, but we feel like we are a team that has capable players to fill in for our starters when they go down. The guys took his loss to heart. We know how to win in this conference and we’ve got to continue to prove it.”

On Being Able to Sustain High-Level Performance without Gurley…
“It’s difficult to do because we’ve been through a lot of emotional highs and lows through this thing. We have to still get up and play every Saturday and the coaches have done a great job in getting us prepared. The leadership in the locker room has only gotten stronger and it’s helped us to maintain our level of play through the past few weeks.”

On being able to handle heavier work load…
“I feel good; I have to do it. We are down on backs and I have to step up. Everything has been great over the last two weeks and I’m ready to run some more. I’m getting way more comfortable. I have help coming in sooner or later, but until then, I’m ready for it.”

On getting the win…
“A win is always important, especially on the road. Everyone was predicting us to lose this game and we were able to get out of here with a win. We have a bye week now, but we still have to prepare for Florida in two weeks.”

On gaining 202 yards against Arkansas…
“We have very good linemen and put together a very good scheme that helped me break open some runs. The linemen are very talented here and it makes my job easier. I was happy to gain 200 yards, but now it’s time to move on from that and start focusing on Florida.”