Bulldogs fight through weather in workout

Bulldogs fight through weather in workout 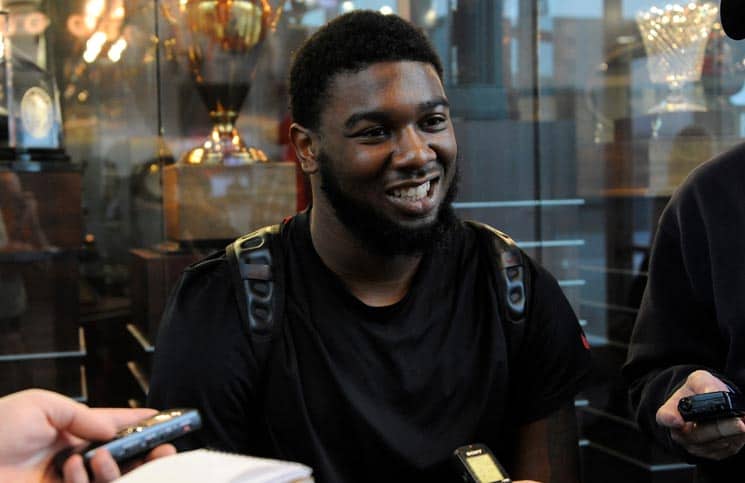 ATHENS, Ga. – Weather was much of the story during the No. 10-ranked Georgia Bulldogs’ full-pads practice on Tuesday afternoon. A windy rain began about 30 minutes into the workout and continued rotating from intermittent to heavy to downright downpour levels throughout the rest of the session.

At the end of the day, a sopping Mark Richt was pleased with his team’s performance.

“Before practice I told them that today was an important day and we were going to get our work done,” Richt said. “I told them after practice that I was proud that they didn’t gripe and moan. They just focused in on what we were trying to get done and actually had a little fun doing it.”

The Bulldogs (5-1, 3-1 SEC) are preparing for this Saturday’s SEC outing against Arkansas (3-3, 0-3 SEC) in Little Rock. Georgia’s assistant coaches visited with the media following the practice, including Kevin Sherrer, who coaches Leonard Floyd, one of the Bulldogs’ captains against the Razorbacks.

“Since I’ve been here, Leonard shows up every day to work and gives good effort,” Sherrer said. “He’s a quiet leader. He doesn’t say a whole lot, but a lot of times his effort motivates other people. Just in his play, he’s going to make plays, but I think the consistency that he’s had in being able to perform sets him apart. He might not have as many sacks and flashy stats, but the plays, when we look at it from a coaching standpoint, he’s playing winning football. He’s affecting others around him and that’s what we’re looking for from him as a captain and a leader.”

Earlier on Tuesday, Richt discussed this weekend’s matchup with the Razorbacks at length during the Bulldogs’ weekly press conference.

“(It is) another big challenge for us, another away game in our little streak of about four away from home,” Richt added. “We’re looking forward to the challenge. I think we had a good practice yesterday. I was very pleased with the energy of the day and we’ll see what we can do today.”

Saturday’s game will kick off at 4 p.m. ET and will be televised nationally on the SEC Network, with Dave Neal calling play-by-play, Andre Ware serving as color analyst and Laura Rutledge serving as the sideline reporter.