Bulldogs closing in on SEC showdown with Tigers

Bulldogs closing in on SEC showdown with Tigers 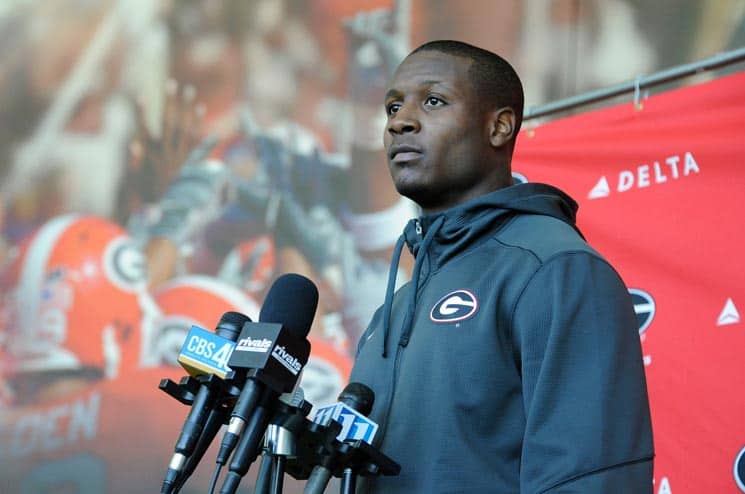 ATHENS, Ga. – The 13th-ranked Georgia Bulldogs conducted a two-hour workout Wednesday as their SEC Eastern Division showdown with No. 23 Missouri is on the horizon.

Georgia coach Mark Richt said Wednesday was another productive practice as game day with the Tigers approaches. For the season, Georgia is +4 in turnover margin while the Tigers are +5. In the past two games, Georgia has managed a defensive touchdown.

“When I was an offensive coordinator, I loved it when our defense scored,” Richt said. “It counts on the offensive stats as a Georgia score and that’s nice. We’ve done a good job in the turnover ratio this year, and when we’ve had them, we’re not giving up much.”

“The Bulldogs have scored 24 points off eight turnovers while their opponents have managed just three points off four miscues. Georgia ranks fifth in the SEC in turnover margin while the Tigers are third.

Richt was asked to provide an update on junior wide receivers Malcolm Mitchell and Justin Scott-Wesley, and he indicated that both should play Saturday. Mitchell saw his first action of the season last Saturday against Vanderbilt and had one reception for 11 yards. In Mitchell’s career, he has appeared in 25 games with 85 receptions for 1,237 yards and eight touchdown while Scott-Wesley has played in 14 games with 22 catches for 446 yards and three touchdowns. Both had been sidelined with knee injuries since last season.

Kickoff for Saturday’s matchup between the Bulldogs (4-1, 2-1 SEC) and the Tigers (4-1, 1-0 SEC) in Columbia is set for noon ET. The game will be broadcast nationally by CBS.