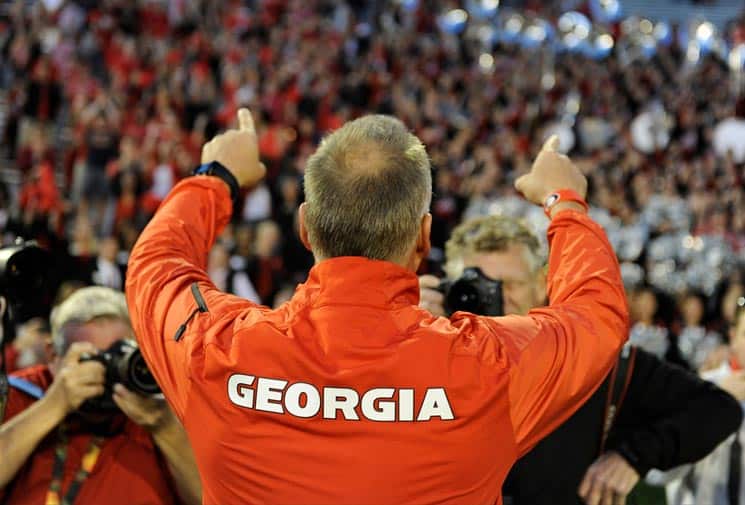 ATHENS, Ga. – The No. 13-ranked Georgia football team returned to the Woodruff Practice Fields on Monday with a 90-minute workout in shorts and shoulder pads.

The Bulldogs (4-1, 2-1 SEC) will continue conference play this week as they travel to Missouri (4-1, 1-0). The game will kick off at noon and will be televised by CBS.

“I liked the tempo and the energy we showed tonight,” Georgia coach Mark Richt said. “We’re facing another quality opponent this week and we need to have a great week. We got off to a good start today. Tuesday will be huge for us, too. It’s important that we build off what we started today.”

Monday’s practice was held on the Bulldogs’ FieldTurf as Missouri’s Faurot Field at Memorial Stadium also has an artificial surface.

• It was announced Monday that the Saturday, Oct. 18, game between Georgia and Arkansas in Little Rock will be televised by the SEC Network with kickoff set for 4 p.m. This will mark Georgia’s third appearance on the SEC Network this year.

• Gurley was named to the Paul Hornung Award Honor Roll for the third time this season after his performance versus Vanderbilt. Gurley accounted for 187 all-purpose yards (163 rushing, 24 receiving) and 237 yards of total offense and two touchdowns against the Commodores. He attempted and completed his first career pass, a 50-yarder to tight end Jeb Blazevich that is the longest completion for the Bulldogs this year. Gurley is ranked second nationally this season with an average of 194.6 all-purpose yards and is third in the country in rushing yards per game at 154.6. The Hornung Award is given annually to the nation’s most versatile player.

• Tailback Nick Chubb was named the SEC Co-Freshman of the Week. He rushed for 78 yards and a touchdown on eight carries in Georgia’s win over Vanderbilt. Chubb averaged 9.8 yards per carry, including a 33-yard scoring run.