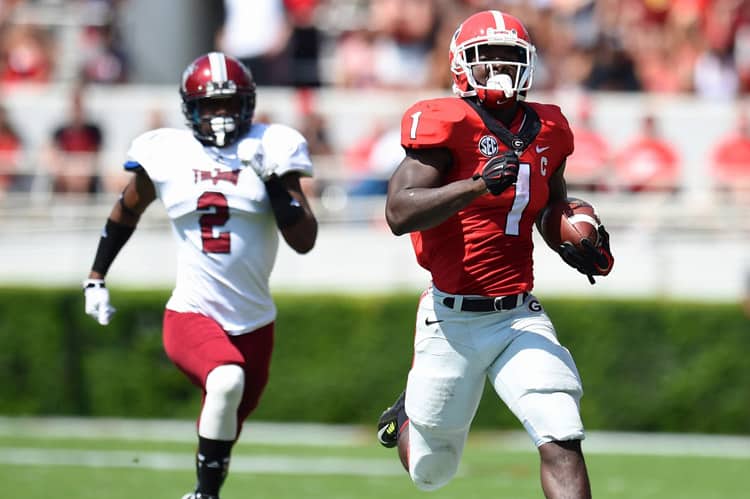 ATHENS, Ga. – The No. 13/14 Georgia Bulldogs handed the Troy Trojans a 66-0 loss in front of 92,746 fans and a televised SEC Network audience on Saturday, September 20 at Sanford Stadium in Athens, Ga. The Bulldogs are now 2-1 on the year, while Troy falls to 0-4 on the year. The win marked the first time that Georgia has scored more than 60 points in a game since 2011 against New Mexico State.

On the opening drive, Troy went all the way to the Georgia nine-yard line, but the defense held, forcing Troy to attempt a field goal, which sailed wide.

On the ensuing drive, Gurley took the ball 70 yards on four carries, setting the Bulldogs up at the Troy 10-yard line. Michel took it the rest of the way, picking up 10 yards on two carries for the touchdown that gave Georgia a 7-0 lead after the Marshall Morgan’s extra point.

Troy got the ball back, but promptly turned it over on the first play of the drive. Rico Johnson forced the fumble, which was recovered by Aaron Davis. Davis returned the ball 11 yards to the Troy 27. Facing 3rd-and-7 at the Troy nine, Mason found Kenneth Towns in the end zone for the touchdown that put Georgia up 14-0 after the point after.

The Bulldogs extended their lead to 21-0 on a two play, 83-yard drive that took just 33 seconds. On the first play of the drive, Michel raced 75 yards down the sideline. Michel got the call again, hammering up the middle for eight yards and the score.

Georgia added a field goal at the start of the second quarter, capping off an eight-play, 41-yard drive that took 3:21 off the clock. The drive ended when Morgan hit a 37-yard field goal that made it a 24-0 game.

The Georgia defense forced a three-and-out on the next Troy drive, resulting in a 34-yard punt that was returned 52 yards for a touchdown by Isaiah McKenzie that put the Bulldogs up 31-0. It was the first punt returned for a touchdown since Brandon Boykin accomplished the feat in 2012 against Michigan State.

Michel added his third touchdown of the game on Georgia’s next drive. Mason began the drive with a sideline passes to Shakenneth Williams that set the Bulldogs up at the Troy 32. Michel finished the drive with a pair of rushes for 18 yards and a touchdown that made it a 38-0 game.

Troy put together a nine play, 40-yard drive but turned it over on downs after a failed fourth down conversion. Ramsey came in under center on the ensuing drive and orchestrated an eight-play, 61-yard drive that took 2:36 off the clock and put Georgia up 45-0. Ramsey’s first career completion went to Conley for 19 yards. He found Conley again three plays later for a 39-yard completion that gave Georgia a first down at the Troy three. After a penalty moved Georgia back to the six-yard line, Ramsey connected with Bennett for a six-yard touchdown that extended the lead to 45-0.

Georgia made it a 52-0 game on the opening drive of the second half. Michel set up in the wildcat and handed the ball to McKenzie, who took it 49 yards to the Troy 26. Three plays later, Mason tossed a 10-yard touchdown to Bennett that made it a 51-0 game.

Troy threatened on its second possession of the second half. Troy marched down to the Georgia 10-yard line before Tramel Terry picked off Dontreal Pruitt in the end zone. It was the first career interception for Terry and the second turnover by the Georgia defense in the game.

Bauta led the team on a pair of touchdown drives in the fourth quarter. The first was an eight-play, 62 yard drive that took 4:13 and made it a 59-0 game. Brendan Douglas was the leading rusher on the drive, picking up 33 yards on four carries before Bauta scored on a seven-yard run. Bauta again found the end zone with 6:18 left in the game, giving Georgia a 66-0 lead.

Georgia returns to action on Saturday, September 27 at noon when it hosts the Tennessee Volunteers in Southeastern Conference action. The game will be televised on ESPN.

Opening Statement…
“”It’s always nice to give guys a chance to play. We had a massive amount of guys get in. Guys got in and guys made plays. We played a bunch.”

“I want to say thank you to our fans. The Dog Walk was outstanding, the students were in their seats in numbers in presume, the Redcoat Band, the cheerleaders, they all did their part. When we got started, they were all there ready to go.”

“Now we’ve got to turn our attention to conference play with Tennessee. It’s hard to get the feeling after South Carolina out of your system quite frankly. This helps a little bit, but we’ve got to play a conference game and get a victory to get back on track. Hopefully we’ll be up for the task.”

“The greatest thing that happened today was the play on both the offensive and defensive lines. The offensive line created space for the runners and gave the quarterbacks time to throw. The defensive line took care of business and made it hard for them to run the ball. It was a really good performance.”

On his big day…
“It was awesome to just get a chance to come out and win again. We just want to win. The stats will come but it’s the win that matters most.”

On his kickoff return for a touchdown…
“We were just going out there to execute. We wanted to start fast and finish strong. We really wanted to emphasize starting fast and maintaining. I think we accomplished that today. It was a good win.”

On today’s game…
“Today was all about just taking care of business. We wanted to come out and move on from last week and just execute. The maturity of this team was really great all around. There were no lasting emotions from the South Carolina game. It was good to play our best and move on.”

On not throwing an interception through the first three games of the season…
“It’s really more about making good decisions and putting in the preparation in the film room compared to accuracy. I think this speaks more about my work in the film room and knowing where to go with the ball before the play. If you know where you’re going before the snap then you know it’s going to be a completion and not an interception.”

On his sack…
“It feels like a little bit of a weight off my shoulders. It was one of my better sacks too. I didn’t think I was going to get to [Troy QB Dontreal Pruitt] because he had been getting rid of the ball early all game. But it was a good hard hit and I’m just ready to go out and get some more.”

On using this performance as confidence moving forward through SEC play…
“I think we can carry this and compete in SEC play if we all click. If we execute our game plan to the best of our abilities it’s definitely possible.”

On the defense needing a game like this to gain more confidence…
“I feel like we needed to correct some mistakes that we didn’t do last game. I felt like this game helped us a lot with the forced turnover and being aggressive.”

On the shutout…
“We don’t worry about what the scoreboard says. We just take it play by play. That’s really what Coach Pruitt has tried to instill in us this year. We just have to go out and execute and we did a good job of that today.”

*Piling On The Points, Yards: The Bulldogs beat Troy 66-0 after piling up 547 total yards. This is the most points for Georgia since 1994 when they beat Northeast Louisiana 70-6. The margin of victory of 66 is the most since 1958 when the Bulldogs blanked Citadel 76-0. Before today, Georgia’s last shutout came during a 38-0 win at Auburn in 2012.

Today, the Bulldogs led 45-0 at the half, which was the most points Georgia tallied in a half since a school record 49 in the first two quarters against New Mexico State in 2011, building a 49-3 lead. Georgia won that game 63-16. The Bulldogs came into today’s game averaging 40 points per game. Georgia improves to 54-10 in non-conference games under Mark Richt including 37-1 at home.

Senior QB Hutson Mason completed the day going an efficient 8-for-11 for 97 yards and two touchdowns. Senior receiver Michael Bennett led the receivers with three catches for 34 yards and a pair of touchdowns. QBs Brice Ramsey and Faton Bauta also saw action and completed their first career passes. Ramsey went 4-for-8 for 66 yards and a touchdown while Bauta finished 2-for-3 for 17 yards and his first two career rushing touchdowns. Georgia tallied 367 rushing yards (the most in the Richt era) on 39 attempts, for a 9.4 average.

*First Timer: Freshman TB Sony Michel (10 rushes, 155 yards, 3 TDs) scored his first three rushing touchdowns and ran for a career-high 138 yards on seven carries (19.7 average) in the first half. His first career rushing TD came on a 6-yard run at the 7:59 mark in the opening period to put Georgia up 7-0. Michel recorded his first career touchdown reception last week at #24 South Carolina. Later in the first quarter against the Trojans, Michel scored on an 8-yard run that came one play after a 75-yard run by the freshman. This marks the longest run for a Bulldog since Todd Gurley ran for a 75-yard touchdown at Clemson in 2013. Gurley had six carries for 73 yards at the half today and moved up to fourth all-time in most rushing yards at UGA with 2,776.

*To The House: Freshman receiver Isaiah McKenzie ran back a punt 52 yards for a touchdown to put Georgia up 31-0 at the 10:48 mark in the second quarter. McKenzie’s third career punt return was the Bulldogs’ first punt return for a score since Brandon Boykin ran 92 yards against Michigan State in the 2012 Outback Bowl.

Another freshman receiver, Shakenneth Williams, made the most out of his first snap with a 35-yard reception. Redshirt freshman quarterback Brice Ramsey made his Bulldog debut in the first half and directed the team on a 61-yard scoring drive, including a 6-yard touchdown to senior receiver Michael Bennett. This marks Bennett’s 14th career receiving touchdown.

*Defense: The Bulldog defense held Troy scoreless as the Trojans finished with 216 yards on 61 plays. Coincidentally, Georgia ran 61 plays today and had 547 yards of total offense. The Trojans missed a 26-yard field goal early in the first quarter. Junior OLB Jordan Jenkins led Georgia with five tackles, including a sack and 1.5 tackles for loss, all coming in the first half.

*Points off Turnovers: Georgia now holds a +4 turnover margin on the year and has converted those miscues into 10 points. Freshman CB Rico Johnson jarred the ball loose following a Troy reception and redshirt freshman FB Aaron Davis scooped up the fumble. Redshirt sophomore receiver Kenneth Towns scored his second career touchdown on a 9-yard pass during the next series. In the third quarter, redshirt freshman SS Tramel Terry snagged his first career interception in the Troy end zone. This broke a streak of 176 consecutive passes without a pick for Trojan QB Dontreal Pruitt. Georgia failed to score on its next possession.

*Starters: Freshman TE Jeb Blazevich got his first career start. Sophomore SS Quincy Mauger and senior DE Ray Drew, who each started seven games in 2013, got their first start of the season versus Troy. Senior CB Damian Swann did not start, snapping a 29-game starting streak dating back to 2012. Senior C David Andrews owns the team lead with 30 consecutive starts.