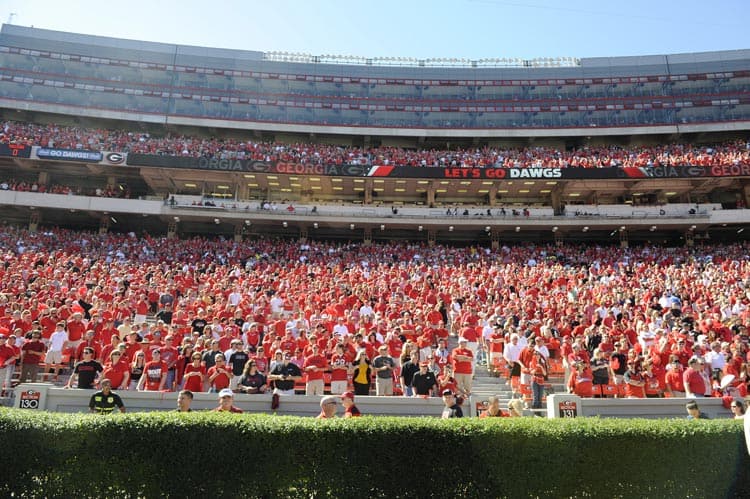 ATHENS, Ga. – A $5 increase in football tickets prices for 2015 and 2017, along with approval for funding to explore an indoor practice facility for football and other sports, highlighted the quarterly meeting of the University of Georgia Athletic Association Board of Directors on Friday.

“Our ticket prices are about middle of the road in the SEC and still will be after these increases,” said J. Reid Parker Director of Athletics Greg McGarity. “Our fans have been loyal to us through seasons where we were 12-2 and when we were 6-7, and we’re extremely appreciative of that support.”

In addition, the board approved an increase of $10 to tickets for the annual Georgia-Florida game in Jacksonville in 2015.

“This is something both schools are in agreement with,” McGarity said. “If you look at other neutral-site rivalry games, the Red River Shootout between Texas and Oklahoma has tickets at $125 and the Army-Navy game has tickets at around $125 so we’re still well below those.”

The board also approved $400,000 for the initial research into the potential construction of an indoor practice facility, as well as $75,000 to begin design and architectural review for replacement of the video and ribbon boards in Stegeman Coliseum.

“We need to hire an architect and ask them to do the research and prepare models for the two possible locations, adjacent to the Butts-Mehre complex and around the soccer/softball complex,” McGarity said. “Hopefully, we would have something to look at soon. That could be as early as our next (Athletic Board) meeting in February. We need to get all the users together and engage their input. This is not a football-only project. This could be really, really beneficial to our track and field program and other programs like softball, baseball, soccer and others. The first steps in this process are to provide models and to validate where the best location would be.”

“We’re defining student-athlete wellness in a broad, expansive way,” Shipley said. “We’re covering things such as Life Skills, interviewing skills, strength and conditioning, academic support, nutrition, mental health and eligibility. I’d have a hard time believing that any school is doing as much as we are in these efforts.”

“The charge of this group is to have the ability to play a role in the long-range planning and funding mechanisms in facilities and development,” Whitten said.

Student-athlete representatives Chris Conley, a wide receiver on the football team, and Niaja Griffin, an outfielder on the softball team, provided updates on various programs to assist student-athletes and plans of the Student-Athlete Advisory Committee (SAAC) for the coming year.

Early in the meeting, Cheryl Legette, the Chief Operations Officer for the Girls Scouts of Historic Georgia, and girl scout Camille Legette announced that Dr. Carla Williams was the recipient of the organization’s annual Woman of Distinction Award. Williams, who serves as the Executive Associate Athletic Director and Senior Woman Administrator for the UGA Athletic Association, will be officially honored at a ceremony in May 2015.