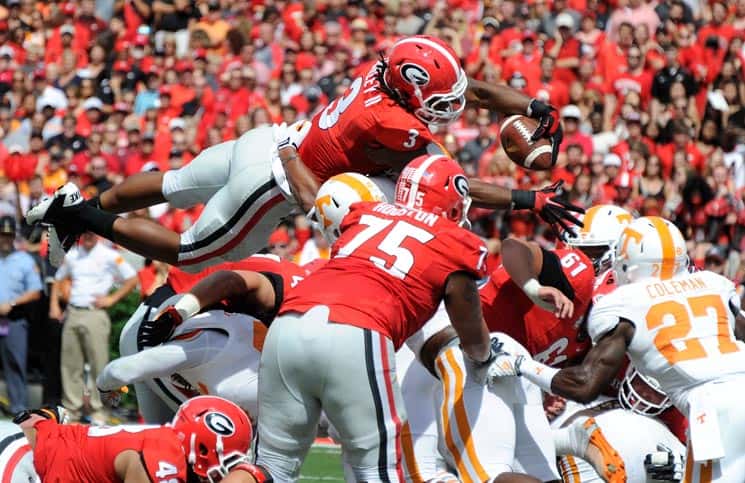 ATHENS, Ga. – Georgia junior tailback Todd Gurley has been named the Athlon Sports National Player of the Week for the second time this season after his performance versus Tennessee, according to an announcement on Sunday.

Gurley, a Tarboro, N.C., posted a career-high 208 rushing yards on 28 carries (7.4 avg.) and two touchdowns. His rushing total today was the most by a Bulldog since 1992 when Garrison Hearst tallied 246 versus Vanderbilt, and the first to go over 200 since Verron Haynes went for 207 versus Ga. Tech in 2001.

Gurley accounted for 285 all-purpose yards (208 rushing, 30 receiving, 47 kickoff return), which ranks in a tie for third in school history. He moved up to No. 2 in school history for Career All-Purpose Yards now with 3,961, trailing only Herschel Walker (5,749).

Also of note, Gurley had his 16th game with at least 100 yards rushing, tying him with Garrison Hearst at No. 2 in the school record books. Gurley now has 33 rushing touchdowns in his career and is tied for third on Georgia’s all-time list with Hearst.

Gurley’s performance included hurdling a Volunteer defender and surging for four yards on a 4th-and-3 situation to collect a first down and run out the clock in the fourth quarter.