Gurley and Georgia out run Tennessee 35-32

Gurley and Georgia out run Tennessee 35-32 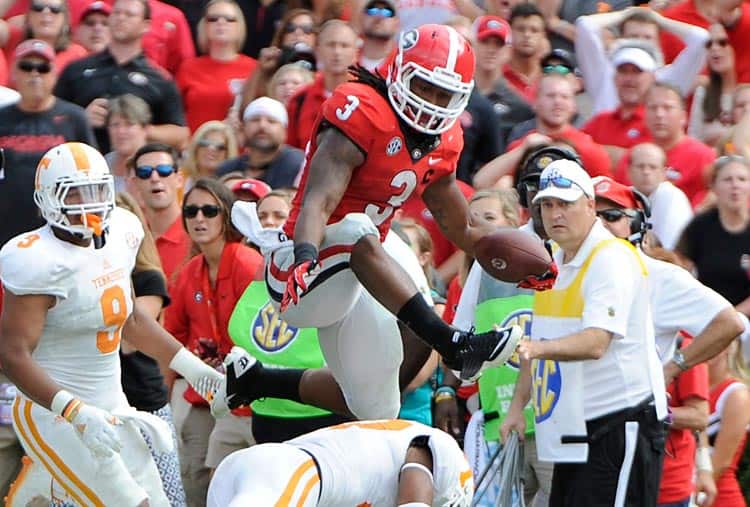 Todd Gurley led the Bulldogs on the ground, rushing for 208 yards and two touchdowns on 28 carries. The game marked the 16th 100-yard rushing game for Gurley, which ties for fourth most in Georgia history. He recorded his 32nd rushing touchdown of his career. Nick Chubb finished the game with 32 yards on 11 carries. Hutson Mason led the Bulldogs with 147 yards on 16-for-25 passing. Michael Bennett, Gurley and Chris Conley were his top targets, finishing with 31, 30 and 30 yards respectively. Mason also accounted for 30 yards on the ground and one touchdown.

Tennessee scored on its first two possessions of the game, jumping out to an early 10-0 lead. On the opening drive, the Vols drove 43 yards on nine plays but settled for a 46-yard field goal that put them up 3-0. Tennessee scored on its next drive on a one-yard touchdown run by Jalen Hurd that made it a 10-0 game.

After a tackle of a loss and a sack, the Bulldogs forced Tennessee to punt with just over two minutes left in the first quarter. Isaiah McKenzie fielded the punt and returned it 29 yards to the Tennessee 32. Georgia needed just four plays to go 32 yards. Gurley took the ball 16 yards on the first play of the drive before Mason found Bennett for seven yards. After a six-yard run by Gurley, Mason rushed three yards on the keeper for the touchdown that cut the lead to 10-7 after the Marshall Morgan extra point.

Georgia took a 14-10 lead under eight minutes left in the half on an 11 play, 87-yard drive. The Bulldogs kept it on the ground for much of the drive, with Gurley taking it for 25 yards before Chubb added 20 yards on three carries. Gurley came back in to finish the drive off with a pair of runs, including the touchdown run of one-yard that made gave Georgia a 14-10 lead.

On their next drive, the Bulldogs went 81 yards on 11 plays that resulted in a touchdown that extended the Georgia lead to 21-10. Georgia went with a healthy mix of run and pass plays that allowed them to convert five first downs. Facing 2nd-and-11 at the Tennessee 20, Mason found Chubb out of the backfield for a his first career-reception that went for the touchdown that put Georgia up 21-10.

Tennessee cut the lead to 21-17 with seven play, 83-yard drive that took just under a minute. Hurd posted runs of 18 and 19 yards before catching a screen pass from Worley for 18 yards that set the Vols up at the Georgia 23. Worley then found Jason Croom down the sideline for a 23-yard touchdown that cut the lead to 21-17 at the half.

The defenses settled in during the third quarter, as the offenses combined for five punts. Georgia got the ball back with 11:09 remaining the game and produced a 5-play, 77-yard drive that resulted in a 51 touchdown run by Gurley. In all, Gurley carried the ball 76 of the 77 yards on the drive.

Tennessee responded on the ensuing drive with a 52-yard drive that was capped off by a 31-yard touchdown pass to Pig Howard. The Vols then went for two and got it to make it a 28-25 game.

The Vols got the ball back with 4:38 left on the clock after Colin Barber sent a punt deep into Tennessee territory that was down at the one. Two plays later, the handoff was fumbled and recovered by Josh Dawson in the end zone for a touchdown that put Georgia up 35-25.

Tennessee answered with a seven-play, 58-yard scoring drive that brought it within three at 35-32. The Vols tried for the onside kick, but Quayvon Hicks recovered it at the Tennessee 45-yard line. The Bulldogs were able to run the clock out for the final 2:14, converting two first downs, including one on fourth-and-three that sealed the 35-32 win.

Georgia returns to action next weekend when it welcomes the Vanderbilt Commodores to Sanford Stadium in Athens, Ga. The game is set to begin at 4 p.m., and will be televised on the SEC Network.

*Series: With today’s 35-32 win, Georgia now has evened the all-time series with UT at 21-21-2, and the Bulldogs have won five straight in the series. This current stretch of success matches Georgia’s longest winning streak in the series, also having won five in a row from 1909-1924.

*Record Day For Gurley: Junior TB Todd Gurley posted a career-high 208 rushing yards on 28 carries and 2 TDs. His rushing total today was the most by a Bulldog since 1992 when Garrison Hearst tallied 246 versus Vanderbilt, and the first to go over 200 since Verron Haynes went for 207 versus Ga. Tech in 2001. Gurley accounted for 285 all-purpose yards (208 Rush, 30 Rec., 47 KO Ret.) which ranks in a tie for third in school history, behind his record 293 versus Clemson earlier this year and 290 by Rodney Hampton vs. Ole Miss in 1987 and Fred Gibson’s 285 versus UK in 2001. Gurley moved up to No. 2 in school history for Career All-Purpose Yards now with 3,961, trailing only Herschel Walker (5,749). Also, Gurley had his 16th game with at least 100 yards rushing, tying him with Garrison Hearst at No. 2 in the school record books. Gurley now has 33 rushing touchdowns in his career and is tied for third on Georgia’s all-time list with Hearst.

*Points of Turnovers: The Bulldogs had two turnovers today that resulted in zero points while Georgia scored 7 points on two fumble recoveries. Georgia now holds a +4 turnover margin on the year and has converted its six recovered turnovers into 17 points. Tennessee’s Todd Kelly Jr. snagged Hutson Mason’s first interception of the year in the second quarter. The Vols went 3-and-out on the next series and punted. To start the third quarter, Mason threw another pick in Tennessee territory. The Vols were forced to punt again three plays later. At the 5:16 mark in the third quarter, junior DE Josh Dawson pounced on a Tennessee fumble to gain Georgia possession at the Bulldog 23-yard line. The Bulldogs later punted it back to the Vols. With 4:27 left in the contest, Dawson recovered a UT fumble in the end zone for a TD. Prior to Dawson, the last Bulldog with two fumble recoveries in a game was Josh Harvey-Clemons vs. Kentucky last year. Before Dawson, the last Bulldog to recover a fumble for a TD was Marcus Howard vs. Hawaii in the 2008 Sugar Bowl. Today marked Georgia’s first defensive TD since the Vanderbilt game last year (Shaq Wiggins, 39-yard INT Return).

*Return Setting Up Points: Set up by a 29-yard punt return by freshman Isaiah McKenzie, the Bulldogs scored their first touchdown at the 1:07 mark in the opening period. McKenzie now has five returns on the year for 109 yards (21.8 avg.). Junior TB Todd Gurley ran for 22 yards on the drive before senior QB Hutson Mason ran in for a 3-yard touchdown. This was Mason’s fourth touchdown run of his career and second of this year. Mason finished 16-for-25 for 147 yards 1 TD and 2 INTs.

*Firsts: Freshman TB Nick Chubb caught a 20-yard touchdown pass, which was his first career reception, to put Georgia up 21-10 at the 1:17 mark in the second quarter. This capped a 21-0 run by the Bulldogs after Tennessee scored its touchdown and field goal in the first 10 game minutes. During the 11-play, 81-yard drive, senior FB Taylor Maxey had his first career catch on a 6 yarder. Maxey also had his first career kickoff return for 13 yards. Chubb had 11 carries for 32 yards.

*Starters: Sophomore J.J. Green started his first career game on defense at safety. Green started two games for the Bulldogs at TB last year. Green joins Corey Moore and Malcolm Mitchell as the current Bulldogs who have started on both offense and defense. Freshman OG Isaiah Wynn, wearing No. 90, started at TE for the Bulldogs in his first career start. There have been 11 first-time starters this year. Senior C David Andrews is leading the team with 31 consecutive starts.

*Injury Report: Freshman TB Sony Michel sustained a left shoulder contusion in the second quarter and did not return.

“Any time you have to use your hands team and have to get a couple of first downs to put it away, it’s obviously a close game. I thought both teams played well.”

“We had two turnovers that could have turned into points, but they didn’t. When you can stop the bleeding after turnovers, it’s huge. The defense did a great job of keeping those from becoming a bad situation.”

“Earlier in the year, I said (Todd Gurley) is at least one of the best players in the country. Now, I’m saying he’s the best player in America. I can’t imagine anyone being more talented, a guy who loves his team more, and a guy who means more to his team than he does to us.”

“The punt took a great bounce and we knocked it down on the 1 and that turned into points. That’s what special teams can do for you. That was huge.”

On using this win as momentum going forward…
“It’s always good to have an SEC win. It doesn’t matter who it’s against. Vanderbilt is coming in struggling, but they played South Carolina very tough. So we can’t take anything for granted.”

On the run game having success as the game progressed…
“When you run against a team you just have to keep going at them. They might be stopping you, but they’re still getting tired down at the line. You just have to keep taking it to them and wear them down and they’ll get tired. Once that happens you get some more opportunities.”

On his second half…
“After those first three-and-outs I just got in a zone. I got tunnel vision and in a mindset where nothing else mattered except getting that victory. I wanted the ball and our linemen just did a great job of opening up holes.”

On the game…
“In the second half we just got zoned in and started playing with confidence .We just let it go, really. They were keeping us off of our game with the screen passes and draws. We just came out in the second half with the mindset that we had to make something happen, and we did.”

On his playing time…
“I’m just happy to be out there with these guys. We have a great group of guys form the line, to the linebackers, to the secondary. Coach Pruitt has done a great job with us. I just try to make the most of my opportunities and the opportunities came today.”

On defensive adjustments at halftime…
“There really weren’t any adjustments. It was just a matter of executing. In the second half we just came out really locked in and started executing our assignments.”