Dye, Zambiasi selected for induction into Georgia-Florida Hall of Fame

Dye, Zambiasi selected for induction into Georgia-Florida Hall of Fame 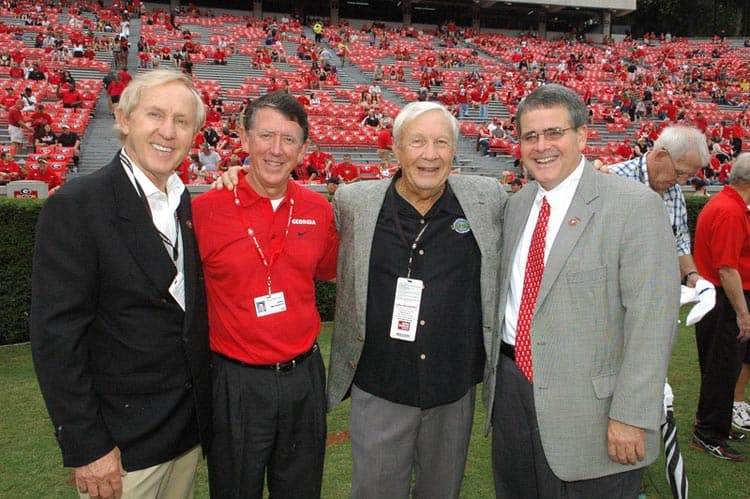 ATHENS, Ga. –Former University of Georgia football All-Americans Pat Dye and Ben Zambiasi have been chosen for induction into the Georgia-Florida game Hall of Fame according to an announcement by the Jacksonville Office of the Mayor.

The induction ceremonies will be held Friday, Oct. 31, at EverBank Field ahead of the annual Georgia-Florida game on Saturday, Nov. 1. University of Florida legends Louis Oliver and James Bates will also be inducted.

“For decades, the annual Georgia-Florida game has been a showcase for top college football talent,” said Mayor Alvin Brown. “The Hall of Fame is an opportunity for all of us to remember and honor the players who displayed
greatness on the playing field and thrilled football fans far and wide.”

Dye was a first team All-SEC lineman in 1958 and earned All-American honors in 1959 and 1960. In 1959, he deflected a Gator pass into a teammate’s arm for a touchdown-scoring interception over the Gators.

The October 31 ceremony celebrates the many talents and careers of the stars of this legendary rivalry. Past inductees are showcased in the Hall of Fame, located in the lobby of the Jacksonville Veterans Memorial Arena.

The honorees will be in attendance at the Merrill Lynch-Bank of America Hall of Fame Luncheon presented by Ruth¹s Chris Steakhouse on Oct. 31 in the West Club at EverBank Field. The luncheon will begin at 11:30am. Tickets are $60, and table sponsorships are available for $600. The deadline to order tickets and sponsorships is Friday, Oct. 24.