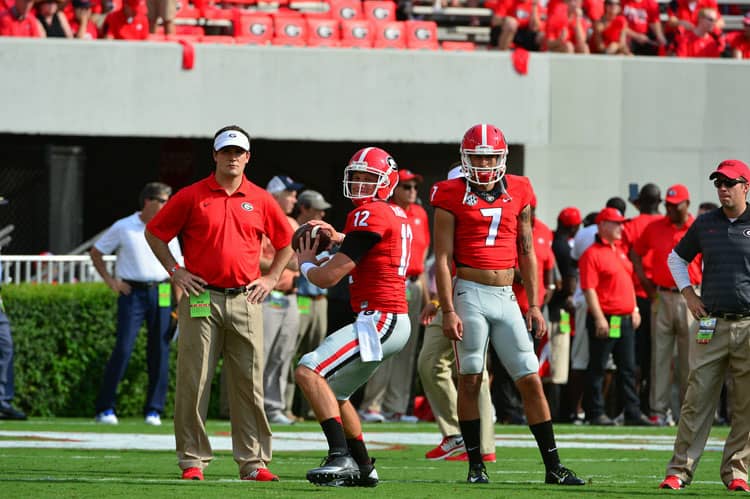 ATHENS, Ga. – The Georgia Bulldogs returned to practice on Monday afternoon for a 90-minute session in helmets, shoulder pads and shorts, their first on-field workout since last Saturday’s decisive victory over No. 16 Clemson. With an open date this weekend, the Bulldogs were able to focus on addressing issues against the Tigers instead of preparing for their next opponent.

“We tried to correct mistakes,” head coach Mark Richt said. “We’re trying to get better every day. We have a lot of things to correct. Knowing you have two open dates, it’s not bad to have one right now prior to a really good Eastern Division foe. It’s a good time for this.”

Georgia conducted meetings and a conditioning session on Monday. Tentatively, the Bulldogs will practice on Wednesday and Thursday and take Friday off this week.

Pruitt’s defense surrendered 21 first-half points before holding Clemson scoreless and to just one first down and 15 yards of offense after the intermission.

“The biggest thing is that you usually don’t play as good as you think you did and you don’t play as bad as you think you did,” Pruitt said. “That’s probably the way it was in the first half. We didn’t play as bad as it appeared. We didn’t make some plays and Clemson did so you have to give them credit. In the second half, we probably didn’t play as good as you may think we did. Some times that’s just the way the ball bounces. I did think we played with effort the entire game.”

“We didn’t turn the ball over, which was a positive,” Bobo said. “We tried to one time, but he recovered it, which was a nice fumble recovery. That was a big plus. So was winning the game in his first start at home in a big game against a good opponent. We’ve got to do a better job of pushing the ball downfield and extending the protections a little bit better, trusting our protections. That’s part of learning to play the position. It’s not like he’s going to walk out there and be a natural because he’s a fifth-year senior. There are still a lot of things he has to go out there and do in a game and learn from them. I expect a big improvement this week because we’ve got to get better at throwing the ball downfield.”

Georgia jumped six and four spots in the Associated Press and Amway Coaches polls, respectively, released on Monday. The Bulldogs were No. 12 in the preseason editions for both but moved to No. 6 in the AP and No. 8 in the coaches ledgers following the 45-21 win over Tigers.

Georgia will return to action next Saturday, when the Bulldogs travel to Columbia, S.C, to face South Carolina in the Bulldogs’ SEC opener. Kickoff is set for approximately 3:30 p.m., and the contest will be broadcast nationally on CBS. The Gamecocks are ranked No. 21 in both national polls this week.