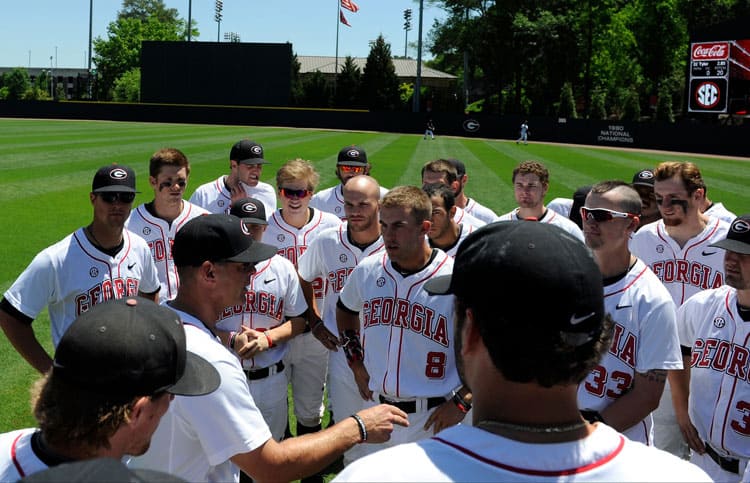 ATHENS, Ga. – The 2015 UGA Baseball Schedule was officially announced today. Georgia will have 33 home games next season, beginning with a three-game set vs. Eastern Illinois on Feb. 13.

The 2015 UGA Baseball Schedule is highlighted by a three-game series in Athens against Florida State Feb. 20-22. SEC teams to visit Foley Field include Missouri, Vanderbilt, LSU, Florida and Arkansas.

Georgia will travel for series against Tennessee, South Carolina, Alabama, Auburn, and Kentucky.

Here is more info from the official UGA release:

The 56-game college baseball season begins Feb. 13 at Foley Field with a series against Eastern Illinois . Georgia will play 18 of its first 22 games at home including a three-game set against Florida State (Feb. 20-22). The SEC series opener will be March 13 here against Missouri. The other SEC home series will be with defending national champion Vanderbilt (April 3-5), LSU (April 17-19), Florida (May 1-3) and Arkansas (May 14-16). Georgia’s SEC road series will be at Tennessee (March 20-22), South Carolina (March 27-29), Alabama (April 10-12), Auburn (April 24-26) and Kentucky (May 8-10). Due to stadium renovations in Tuscaloosa, the Alabama series will be played at the Hoover Metropolitan Stadium in Hoover, Ala.

The 13th annual Spring Baseball Classic to benefit Children’s Healthcare of Atlanta will be May 12 as the Bulldogs battle rival Georgia Tech at Turner Field. The SEC Tournament again will feature the league’s top 12 finishers in the regular season and be played in Hoover, Ala. NCAA Regional action at various campus sites begins in late May and continues through June, culminating with the College World Series (CWS) in Omaha, Neb. The Bulldogs have made six appearances in Omaha including winning the national title in 1990 and reaching the CWS Finals in 2008.

Georgia begins its second year under head coach Scott Stricklin, who has helped steer the $12 million Foley Field Revival project slated to be ready for the 2015 season. Last year, he led Georgia back to the SEC Tournament, compiled an 11-game winning streak during the season and captured a series over seventh-ranked South Carolina, the first over a top 10 team since 2011. Fall practice for the Bulldogs will begin later this month.