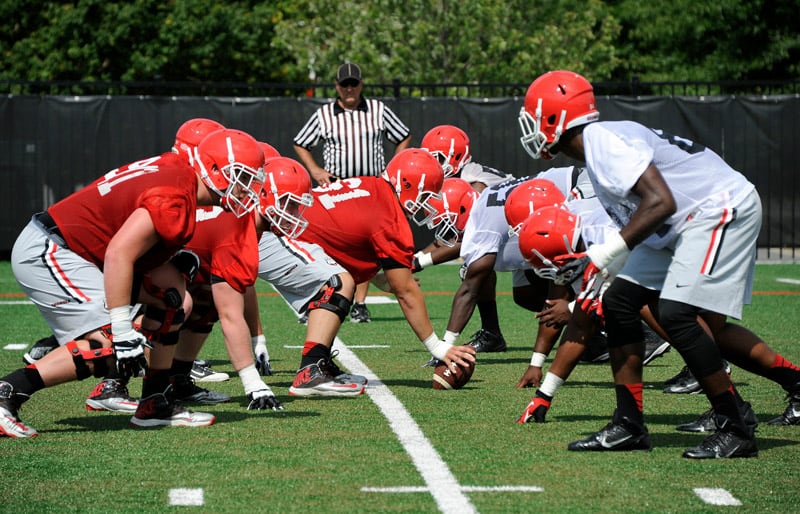 ATHENS, GA – With unseasonable mild temperatures in Athens, the Georgia football team had its first preseason practice on Friday afternoon.

The Bulldogs practiced for two hours at the Woodruff Practice Fields with temperatures hovering around 80 degrees.

While it was a return to the field more many of Georgia’s players, at least 18 new scholarship players suited up for the first time in red and black.

“Football season is here, finally,” said head coach Mark earlier in the day at the team’s preseason press conference. “We’re all excited about that. We decide to walk-through in the morning and practice in the afternoon this year. We’ve done it both ways and that makes the most sense to get your walk-through prior to getting out there on the field and doing a dress rehearsal. I’m very excited about the start of the season. Everybody’s in good spirits as they should be. We’ll see how it goes from here.”

Earlier this week, the Bulldogs were listed No. 12 in the USA Today preseason poll. There were seven Southeastern Conference teams in the publication’s poll.

“I’m excited to get back,” Gurley said at the press conference. “It’ll be exciting to see what the new guys are about. It’ll just be good to get out on the field and compete with my team and have fun.”

Georgia also welcomed in a new defensive staff for its first fall camp.

“Coach (Jeremy) Pruitt (defensive coordinator/secondary) is a great coach and a great man,” said senior safety Corey Moore. “I can relate to Coach Pruitt, first of all because he’s pretty country and I’m a country guy myself. We actually had a senior dinner at his house, maybe two days ago. I really sat down and got a different perspective and more respect for him because of who he is as a person. He’s a great man.”

The Bulldogs start the season at home in Sanford Stadium versus Clemson on August 30. ESPN will televise the 5:30 p.m. matchup. The Tigers are ranked No. 16 in the USA Today poll.