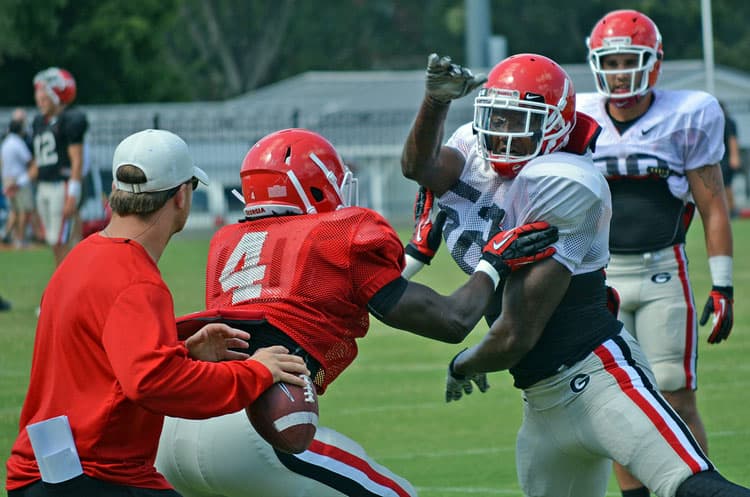 ATHENS, GA – The No. 12-ranked Georgia Bulldogs practiced in front of approximately 2,000 invited guests on Tuesday afternoon. After taking Monday off as the University began Fall Semester classes, the team returned to work on Tuesday and head coach Mark Richt allowed UGA students to view the second half of the Bulldogs’ workout at Sanford Stadium.

About halfway through the two-hour session, students streamed down the North side of the stadium to catch an hour of the workout conducted in shoulder pads and shorts.

“We practiced at the stadium today and tried something new allowing the students to come out for the second half of practice,” Richt said. “I don’t know if they could have made it through the whole practice. It was smoking hot. I noticed we had them on the sunny side of the stadium. If we do it again, we may put them on the other side in the shade. They would probably like that. We appreciate all the students who came out. You could tell they’re excited for the season.

“Usually, the practice after the first day of classes is a little rough,” Richt continued. “The past couple of years, we’ve actually practiced Monday and taken Tuesday off to get books and handle some items related to school. Getting back into the swing of school and football can be difficult. They have things going on and to think about other than football. It’s important that they focus on the job at hand, whether that’s school or football.”

Richt hopes Tuesday’s session helped prepare the students for next weekend’s season opener against No. 16 Clemson.

“We’re really looking for a big turnout for the ‘Dog Walk’ and for the student section,” Richt said. “We’re asking everyone to wear red and black and make it one of the those memorable games, memorable atmospheres. The students are a huge part of that.”

“It was awesome to get out there in front of the students,” Andrews said. “The first day back (after classes start) is always kind of a tough day. Getting back into school, people aren’t used to the schedule. I thought we did a good job today, and they brought a little life and energy to practice. Football is fun when you play in front of people. Having them there and being able to do that was a good opportunity.”

The Bulldogs will make the trek back down Lumpkin Street on Wednesday for a rehearsal scrimmage “between the hedges.”

“Tomorrow we’re going to try simulate our pre-game warm up and a half of football,” Richt said. “We’ll be ‘Georgia’ on offense and defense. This will be the first time that we’ve done that. I love that day. It means we’re getting ready for Georgia vs. Clemson. That’s a good time of the year. Tomorrow will be important to learn how we transition from a scrimmage play to a kicking play or from a kicking play to a scrimmage play. In practice, we usually segment those things out and don’t do them as a transition from one to the other. I’m looking forward to how we handle that.”