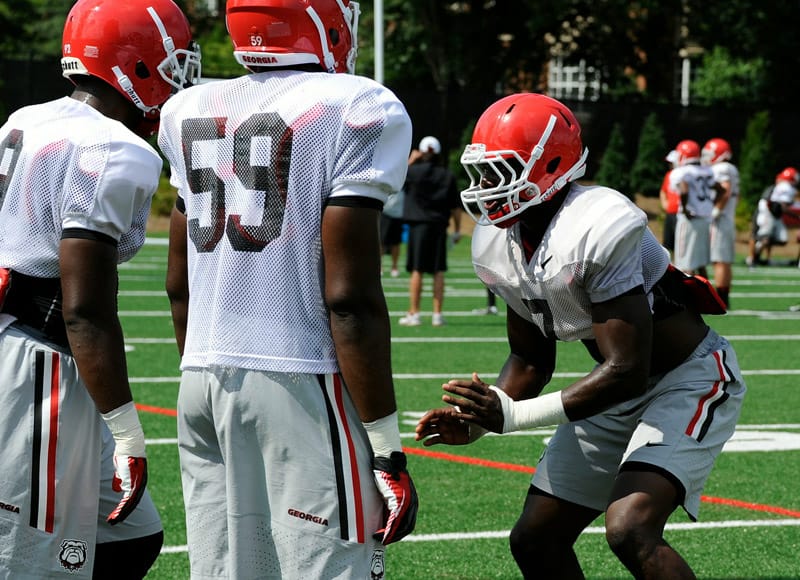 The Bulldogs are in the middle of nine consecutive days of practice. The first session in full pads will be Tuesday. Georgia will hold its first two-a-day workout on Wednesday.

“Some people were talking about the heat but it’s not hot to me,” sophomore strong safety J.J. Green said. “I’m out there learning the plays and my position. Coach (Jeremy) Pruitt is figuring everybody out. If we don’t know something, he’s going to teach us. He’s got a lot of energy, and he’s teaching us to be great.”

Green, a 5-9, 183-pound native of Kingsland, Ga., saw action in 13 games including two starts last year for the Bulldogs as a running back. He moved to the secondary during the spring. Green played on both sides of the football at Camden County High School.

“I miss defensive back a lot, and I’m working on getting better with my footwork,” Green added.

Senior defensive end Ray Drew, a 6-5, 276-pound native of Thomasville, Ga., said the summer workouts and extra stretching and conditioning has helped him prepare for his final camp.

“I feel much better with my agility, and I’m moving around quicker too,” Drew said.

When asked about his fellow Bulldogs on the defensive line, he said “everyone has different attributes that they can contribute, and we’ll need them all this season. They are all vital parts of our defense.”

Georgia, ranked No. 12 in the Amway Coaches Poll released this past Thursday, will open the season against No. 16 Clemson on Aug. 30 at 5:30 p.m. The game will be televised by ESPN.