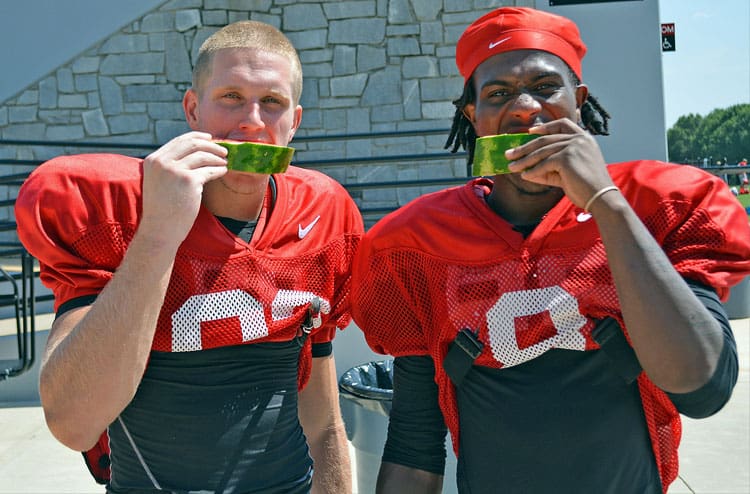 ATHENS, GA – The 12th-ranked Georgia Bulldogs celebrated the end of football camp activity on Saturday with the annual watermelon cutting after their two-hour practice.

Temperatures hovered around 90 degrees during the Saturday morning workout at the Woodruff Practice Fields. The team was able to cool down after practice with the freshly cut Georgia watermelons provided by Doug Coggins and his family from their farm in Franklin County.

“The Coggins family have been doing this for 19 years now and we are very thankful for that,” head coach Mark Richt said after practice. “This is usually a perfect way to end camp, but we decided to wait until now because the last day of camp was Picture Day. We decided to do it today and it was perfect weather for it.”

The watermelon cutting tradition stretches back to Vince Dooley’s coaching days at UGA and has usually symbolized the end of two-a-day practices or the start of classes. Saturday’s event came a little later than normal, yet still meant the same to the Bulldogs.

The 2014 Georgia Watermelon Association Queen Jennifer Eadie continued the tradition of the queen joining the Bulldogs for the cutting. Several Bulldogs made sure to have their picture taken with Eadie before leaving the Woodruff Practice Fields.

When the Bulldogs reconvene on Monday for practice, it will be game week. Next Saturday, Georgia will entertain No. 16 Clemson at 5:30 p.m. in the 2014 season opener. The game will be televised by ESPN.