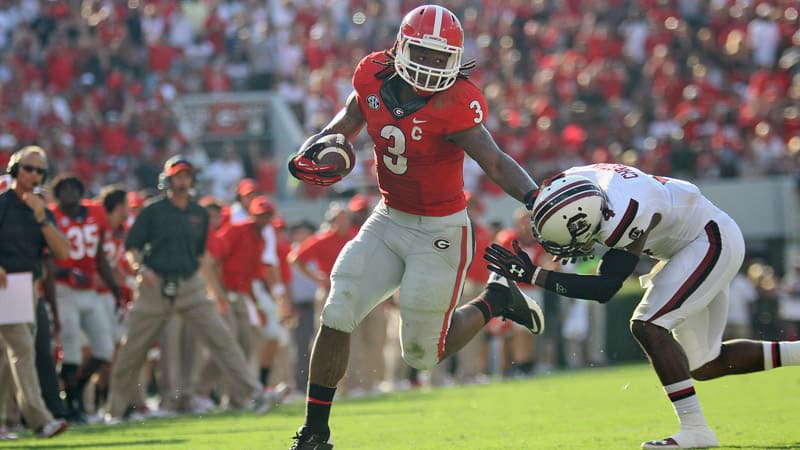 Junior tailback Todd Gurley and senior inside linebacker Ramik Wilson have been included as players to watch for the 2014 Walter Camp National Player of the Year Award.

Gurley, native of Tarboro, N.C., and Wilson, a native of Tampa, Fla., are two of 50 players on the list and two of the nine from the Southeastern Conference.

The list will be narrowed to 10 semifinalists in mid-November. The 2014 Walter Camp Player of the Year recipient, which is voted on by the 125 NCAA Bowl Subdivision head coaches and sports information directors, will be announced live on ESPN SportsCenter on December 11. The winner will then receive his trophy at the Foundation’s annual national awards banquet on January 17, 2015 at the Yale University Commons in New Haven.

Gurley, a native of Tarboro, N.C., was an All-SEC Second Team selection last year despite playing in only 10 games because of injuries. Gurley averaged 98.9 yards a game in 2013 after rushing for 989 yards and 10 touchdowns. The versatile back was also third on the team with 37 catches for 441 yards receiving and a team-leading six touchdowns. As a true freshman in 2012, Gurley piled up 1,385 yards rushing and 17 touchdowns and earned Freshman All-America honors.

Both Gurley and Wilson were picked this week to be First Team All-SEC performers in the coming season.