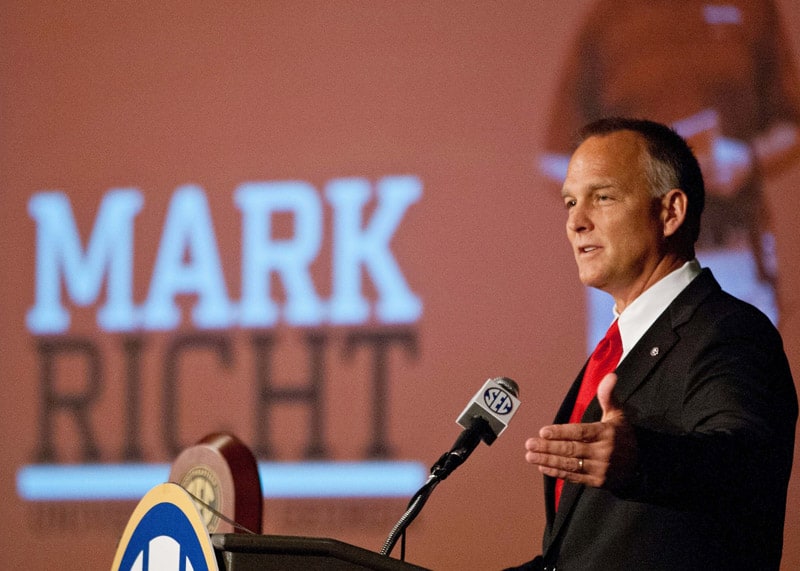 The Georgia Bulldogs are in the spotlight at SEC Media Days today in Hoover, Alabama. Mark Richt spoke in the main media room at 10am ET and took questions from reporters. Here are some of the highlights from the ASAPSports transcript:

On not having Aaron Murray around…

Aaron, obviously a great player, a great leader, just a great person. When you lose a guy like that, it can be tough.

The blessing for us is Hutson Mason being in the program going into his fifth season, a guy that got to watch Aaron’s work ethic, to see how he ran the off‑season program, how he would organize pass skeleton and those types of things.

Not to say we don’t miss Aaron because we do, but it was time for him to go. That’s just college athletics. After four seasons, you’re out of here. We wish him well.

On the leadership of Damian Swann and Ramik Wilson…

The leadership of those guys, Ramik, Amarlo Herrera, Damian Swann, Corey Moore, the young guys are going to play for us. That was kind of the deal a year ago. Now we’re kind of in the same boat.

The one thing I think is crucially important is the fact that Jeremy Pruitt, our defensive coordinator, coaches the defensive backfield. I think when a coordinator is in charge of the backfield and understands what it means to play that position, play those positions, I don’t think he’s going to call anything that those guys can’t execute. The worse thing that can happen is give up a big play because somebody blew it, poor communication, whatever it is.

On opening vs. Clemson again…

Well, I’m glad to be home. Glad the game is going to be Between the Hedges. Our fans are going to be off the chain, ready for it. I think our players will, coaches will. Tremendous opponent in Clemson. Obviously they got us last year. Hopefully we can turn it around and get ’em.

On the defense and Jeremy Pruitt…

I’m not going to talk a lot about last year. But I know this year, Coach Pruitt, he’s a proven coach. He’s won everywhere he’s been. Not only Coach Pruitt, but the rest of our defensive staff. We have brand‑new coaches all the way across the board. Tracy Rocker, Mike Ekeler, and Kevin Sherrer coaching our outside linebackers and our star position, along with Jeremy.

They’re all brand‑new. They all coached high school ball, which I think is great. They know how to take a kid from ground zero. They know how to teach fundamentals extremely well. They’ve all been on college teams that have won national championships. There’s a lot of credibility as they come in.

But I think these guys know what it looks like to win big, and they’ve put in a system of how we’re going to go about our business. The guys are responding well to that. There’s a lot of accountability that goes along with it, as well.

On the possibility of losing Hutson Mason in the past…

Hutson and I had had, I don’t know if I would say ‘many’ conversations, but at least three or four different conversations about what he should do.

The thing I appreciate about him is when he came to me, he was like, Hey, coach, if I was your son, what would you tell me?

And I didn’t say, Hey, I think you should stay no matter what. But I talked about, If you stay, this could happen.  If you go, there’s no guarantee of anything good happening for you.

As we just went through the process of what it might look like, as we get to this point now, at one time when he was deciding should he stay, should he go, Murray could have left after his junior year, given him two years a start.  That was a possibility.

On running backs and the NFL…

Well, in our offensive system at Georgia, I don’t think there’s one thing that any of our backs, when they go to the NFL, I don’t think there will be one thing they haven’t been exposed to in our system. They obviously must learn how to pass protect, not only just slide and block the in‑man on the line.  It’s complicated how we protect.

On his 14th season at Georgia…

Well, I was at Florida State 15 seasons. I’m going onto my 14th season at Georgia. I was mentioning this earlier. I think that happens for two reasons. Obviously you have to win enough games to stick around. But the other thing is you have to choose to stay.

I chose to stay at Georgia before I even came to Athens. When I accepted the job, my goal was that this would be the last stop for me because there’s no greater place than Athens, Georgia. There’s no greater program than the University of Georgia in my mind, for me.

I love watching a guy come in as a freshman, go all the way through graduation, watch him grow up. Then it’s even more fun five, 10 years later for the guy to come back with his family and talk about all the life lessons he learned while he was at Georgia, and being so thankful for the experience.

We’ve got policies that are stronger maybe than some when it comes to the punitive part of it. That’s kind of what everybody talks about. Georgia ends up suspending their guys a little bit sooner in the policy, which I’ve got no problems with.

There’s other things we have in the policy, too, as far as the ability to educate them about what’s happening, giving them counseling, making sure that they’re healthy, make sure there’s no addiction issue we need to deal with.

On early defections to the NFL…

It hasn’t really affected the way I recruit.  It really hasn’t affected the way that I approach this NFL decision.  My goal is for those guys to really just be educated, get good information. Don’t just go by what an agent might say. Don’t go just by what I might say. Try to use the NFL system.

On losing players to injury…

It’s kind of a given. If something happens, Hey, let’s go. Let’s not fret. Let’s not cry about it. Let’s go.

But the thing that hurts the most is just to see the expression on the player’s face who got hurt. The pain of the injury is not even close to the pain of not being able to play anymore. They love playing. They prepared for this moment. Now they can’t play and know there’s a long road ahead of them in rehab.

It’s a crushing blow for those guys. It certainly doesn’t help your team when a lot of your better players get hurt.

On being picked second in the East behind South Carolina…

Obviously, what’s important is what happens at the end of the year. Earlier I got asked that question. I said, I’m not happy to be named number two. I’m not going to start cheering that we’re number two. I think in the end it’s going to be Georgia.

On Tray Matthews transferring to Auburn…

When guys leave our program, my goal for them is that they continue their career and they continue and realize all their dreams. Life’s too short. They’re young men that make mistakes. If somewhere along the way you learn from your mistake, you turn it around, finish your career strong, I’m happy for the guy.

Obviously whether we’re playing Auburn or Tennessee or Florida or anybody else, we want to win that game. I’m not too concerned about who’s over there, did he play for us, all that kind of thing. It doesn’t come into my mind.

I have never hindered a transfer from going anywhere that he wants to go. Because, again, I think life’s too short. If this kid can get a fresh start and do well, I’m happy for the guy.