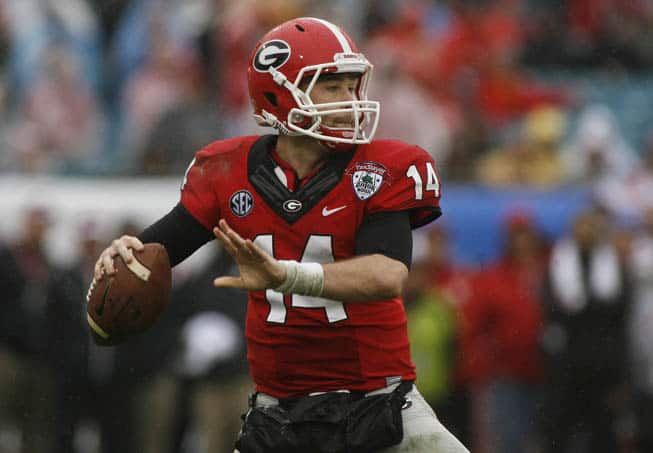 FOX SPORTS has ranked the 2014 SEC quarterbacks from best to ‘most to prove,’ and UGA’s Hutson Mason is ranked 9th.

9th? Yes, 9th. Hutson Mason is ranked behind Kenny Hill of Texas A&M, who may not even be the starter.

Here’s what FOX says about Mason:

Mason takes over full-time for Aaron Murray and will be solid for Georgia, but the Bulldogs will lean on their strength, which is a ground game led by Todd Gurley and Keith Marshall. If Mason can complete 60.9 percent of his passes, as he did last season, and limit the turnovers, the Dawgs will be fine in the East.

I can see Mason begin ranked behind Marshall and Mauk, and possibly Bo Wallace and Dak Prescott, simply because he hasn’t seen that much time on the field.

In five games played in 2013, Mason completed 67-of-110 passes (60.9%) for 968 yards, five touchdowns and three interceptions. Some of that was mop-up duty against North Texas and Appalachian State.

But after Aaron Murray was lost for the season, Mason finished the game against Kentucky and then started against Georgia Tech and Nebraska.

Mason has shown he’s definitely not the 9th best quarterback in the SEC. He will get the chance to prove that soon enough.