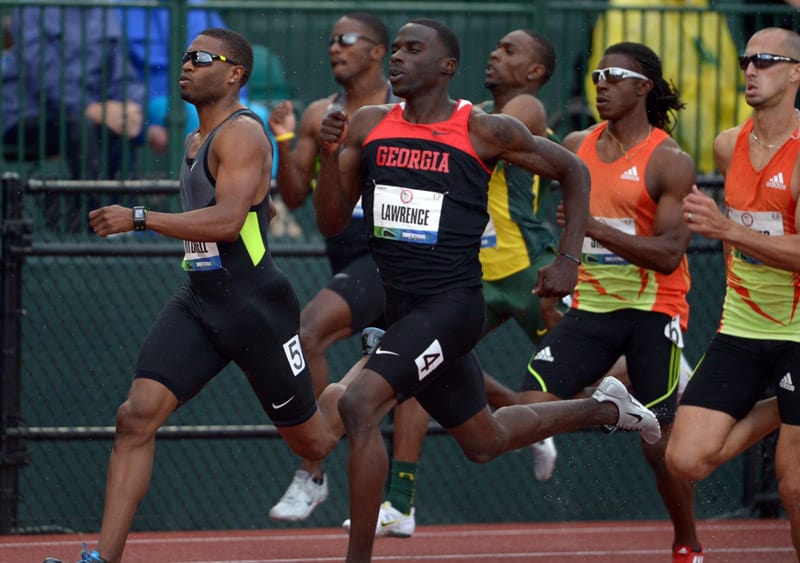 A Jacksonville, Fla., native, Lawrence captured Southeastern Conference and NCAA titles and set a collegiate record during his Georgia’s track and field career from 2009-12 and graduated in 2013. He experienced one of the most prolific indoor careers in SEC history and still holds three school records.

“In speaking for the UGA track and field community, I am shocked and pained with news of Torrin’s death,” said Bulldog head coach Wayne Norton. “First, my prayers for comfort are for Torrin’s mother and family. Second, this makes me reflect on Torrin and remember him as one of the greatest talents I have ever seen in our sport and as gentle man.

“Whenever our precious young people die, it’s a tragedy which is not be easy for many of us to get over. Torrin was an easy person to get along with and almost always improved the atmosphere wherever he went. He did some great things in track and for UGA, and in fact, made history at UGA by winning an individual men’s NCAA championship in a running event. Torrin was one of the world’s greatest indoor 300/400 runners when you look at his accomplishments.

“With all of that said, one of the first memories that came to my mind after getting the news from one of my coaches was one from away from the track when Torrin was attending the church where I was and he was baptized after one of the services. I thank God for Torrin Lawrence. I pray for all of his classmates, teammates and coaches who are grieving and trying to understand why we lost one of the good guys.”

Since his time as a Bulldog, Lawrence had been running professionally and representing his country in international competitions.

“We were devastated to learn of Torrin’s passing early this morning,” said USA Track & Field CEO Max Siegel. “Our thoughts and prayers go out to his family, friends and everyone who knew him. Torrin represented USATF with pride and passion, and had an incredible future ahead of him. We join those who will miss him deeply.”

As a first-year freshman, Lawrence captured the 2009 SEC indoor 200-meter dash title in his first league meet. He was an All-American in the same event with a seventh-place national finish before being named the 2009 SEC Freshman Runner of the Year.

In 2010, Lawrence was named the U.S. Track & Field and Cross Country Coaches Association (USTFCCCA) National Male Track Athlete of the Year after earning the organization’s South Region Athlete of the Year as a freshman the year before. He highlighted his sophomore year by winning the SEC and NCAA championships in the indoor 400. This remains the only indoor NCAA title in a sprints event for the Bulldog men in history.

Lawrence graduated from UGA with a degree in Sociology in May 2013. He signed to run professionally with Nike following his collegiate career. Lawrence was a member of Team USA at the inaugural IAAF World Relays in 2014, competing on the men’s 4×400 relay. The American foursome finished in 3:01.09 in the prelims with Lawrence handling third leg duties.

Lawrence competed at USA vs. The World in 2013 as a member of the winning 4×400 relay team, running an impressive opening leg to hold off the Jamaicans in 3:00.91. Just two weeks ago, Lawrence ran a lifetime best outdoors at the Kortrijk Guldensporenmeeting in Belgium, turning in a time of 45.32. He posted three 400 wins on the 2014 season, including the Tom Jones Memorial Classic over Olympic medalists Tony McQuay and Kerron Clement.