No. 7 South Carolina evens series with Georgia after 5-2 win Saturday

No. 7 South Carolina evens series with Georgia after 5-2 win Saturday 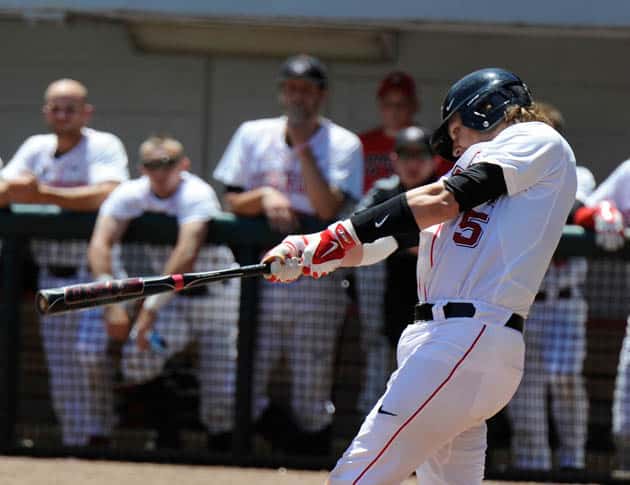 Seventh-ranked South Carolina defeated Georgia 5-2 to even an SEC series Saturday in front of a sold out crowd of 3,256 at Foley Field.

South Carolina (35-12, 13-10) starter Jack Wynkoop (6-3) picked up the win as he pitched six solid innings, giving up two runs on five hits and a walk. Cody Mincey came in for relief and pitched 2.2 innings allowing no runs on four hits. Closer Joel Seddon secured the final out of the ballgame to notch his SEC-leading 13th save of the season.

Bulldog freshman starter Robert Tyler pitched well for 4.2 innings but was forced out of the game due to a high pitch count of 103. Tyler allowed two runs on three hits and four walks to go along with his seven strikeouts. Ross Ripple came in for a relief appearance and was handed the loss, dropping his record to 2-1. Ripple pitched two innings allowing two runs on one hit and three walks. Jarrett Brown and David Gonzalez both also made relief appearances, Gonzalez was unscathed, while Brown was charged with an earned run.

“It’s no secret two-out walks will kill you and both of those scored in the seventh,” said Georgia coach Scott Stricklin. “We had a couple of chances to answer, and we brought the tying run to the plate in the ninth, but credit their pitching staff. We walked nine and hit a batter so that’s 10 free bases, and you can’t do that especially against a good team. Sooner or later, that’s going to catch up to you. Our goal was to win this series, and we still have a chance to do that on Sunday.”

Georgia’s offense was led by both Zach Bowers, who hit his third home run of the season, and by Stephen Wrenn, who went 3-for-4 with a walk and a run. Hunter Cole also tacked on two hits for the day.

Wrenn led off the first with a walk, he then moved to second on a sacrifice bunt by Connor Welton. Next, Cole slapped the ball through the infield to put runners on the corners for clean-up hitter Nelson Ward. Ward chose to attempt a squeeze play and he executed it perfectly giving the Bulldogs an early 1-0 lead.

South Carolina threatened in the second as they loaded the bases with one out. Tyler then buckled down to force a strikeout of Patrick Harrington, and then escaped the jam with a Gene Cone flyout to left. This was the first of three times the Gamecocks left the bases loaded as they wound up leaving 15 on the day.

South Carolina took the lead in the third when Grayson Greiner cranked a two-run home run over the left field fence. It was Greiner’s second home run in as many days and seventh of the season.

Bowers tied the game at two when he led off the fourth with a home run into the parking lot beyond the left center wall. The solo shot was Georgia’s first four-bagger since April 8th, when Cole hit a first inning blast against Clemson.

In the fifth, South Carolina threatened, but stranded the bases loaded once again. After the Gamecocks filled the sacks with two outs against Tyler when Ripple got the call. On Ripple’s second pitch, center fielder Tanner English attempted a squeeze play of his own. The bunt trickled in between the mound and first base, Ripple quickly chased down the ball, and dove and scooped the ball to first all in one motion, beating English by just a step.

South Carolina claimed the lead for good in the seventh. After a pair of two out walks, English slashed a RBI single to left. Next, Harrington dropped a single in front of Georgia right fielder DJ Smith to extend the Gamecock lead to two.

Georgia (22-23-1, 8-14-1 SEC) was unable to capitalize on an opportunity in the seventh. Skyler Weber blooped a pinch-hit single to center, two batters later with two outs Wrenn laid down a bunt single. Welton was then hit by a pitch to load the bases for Cole, who flew out to right field.

The Gamecocks added an insurance run in the eighth. Marcus Mooney knocked a one out single to right; he was then chased around the bases by a Joey Pankake double to the left field corner. In the ninth, South Carolina came close to adding to their 5-2 lead when they loaded the bases once more, but for the third time they stranded three.

Georgia threatened one final time in the bottom of the ninth. With two outs, Jess Posey forced a full count walk; following him Wrenn hit a chopper single to bring the tying run to the plate and Welton was called out on strikes.

The final game of the series will begin Sunday at 1 p.m.