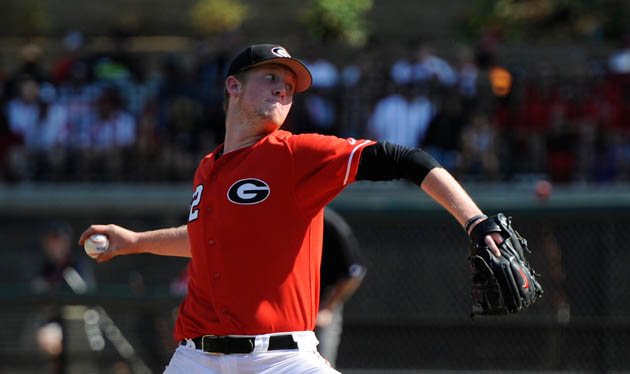 ATHENS, GA – Freshman Robert Tyler tossed a three-hit shutout to lead Georgia to a 2-0 win over 11th-ranked Ole Miss Saturday in front of a crowd of 8,158 at Swayze Field.

Tyler shut down the Southeastern Conference’s top offensive team in going the distance for his first career complete game as the Bulldogs evened the series. He did not walk a batter and struck out four to improve to 5-4 on the year. Georgia (25-24-1, 10-15-1 SEC) pushed across single runs in the eighth and ninth with two-out base hits as the Rebels dropped to 36-15 overall and 16-10 in the SEC.

“This was about as good a win as you can have against one of the best teams in the country, and Robert Tyler gave a masterful performance,” said Georgia coach Scott Stricklin. “Ever guy in Ole Miss’ lineup makes you feel uncomfortable, and Robert did a great job. We played good defense behind him. Everybody stepped up and gave great effort. I’m really proud of them for hanging in there and believing in what we’re doing. Daniel Nichols got another big base hit for us to get us on the board and Conor Welton did it in the ninth for our second run.“

Rebel left-hander Christian Trent and Tyler were locked in a pitcher’s duel as both carried a three-hit shutout until the seventh. In that frame, the Bulldogs loaded the bases with two outs to chase Trent. DJ Smith reached on a bunt single to start the rally. Jess Posey and Mike Bell followed with walks to bring up Wrenn. The Rebels looked to right-hander Evan Anderson. Wrenn tried to bunt twice and then on a 1-2 pitch, he struck out swinging to keep it a scoreless contest. Trent, who came in with a 7-0 record and 2.57 ERA, did not factor in the decision after pitching 6.2 innings with three hits allowed along with four walks and three strikeouts.

In the eighth, Georgia broke through for a 1-0 lead against Anderson. Conor Welton led off the inning with a base hit and took second on a sacrifice bunt by Nelson Ward. Pinch-hitter Sean McLaughlin moved him to third with a groundout to the right side. Then, sophomore Daniel Nichols lined a two-out, 2-2 pitch to right field for a run-scoring single. In the ninth, Georgia made it 2-0 with a two-out RBI-single from Welton, scoring Posey. Anderson got the loss to fall to 1-1, surrendering two runs on five hits.

“This was the best I’ve pitched all year, and I knew if I just did my job, we were going to score,” said Tyler. “Everybody did their job today, and we got the victory.”

The rubber game of the series on Sunday will start at 2:30 p.m. EDT.