Lawlor goes the distance as Bulldogs beat No. 7 South Carolina

Lawlor goes the distance as Bulldogs beat No. 7 South Carolina 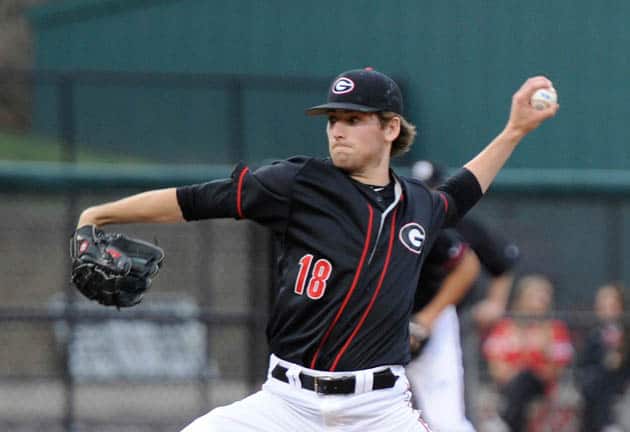 In their first home game in nearly a month, the Georgia Bulldogs handed No. 7 South Carolina a 3-1 loss behind a complete game effort from sophomore Ryan Lawlor.

Lawlor and the Bulldogs (22-22-1, 8-13-1 SEC) held the Gamecocks (34-12, 12-10 SEC) to just three hits and a run in earning their fourth Southeastern Conference series-opening win of the season. Georgia victory snapped a season-long eight-game losing streak, all on the road. Friday marked Georgia’s first home game since April 12.

In his 12th start this season, Lawlor (4-4) earned the victory, facing only two batters over the minimum. The win also marked the third time this season, and third in his past four starts dating back to April 11, versus Tennessee that Lawlor has gone the distance. He struck out six and only allowed one Gamecock past second base. The home run he surrendered was just the second all season.

Jordan Montgomery (6-4) pitched well but got the loss going seven innings and allowing seven hits and three runs, only one of which was earned.

Offensively, the Bulldogs broke the scoreless tie in the fourth inning. Conor Welton led off the inning with a base hit and advanced to second on Hunter Cole’s groundout to first.

Nelson Ward belted the ball to the deepest part of right-center field as the ball struck off the 365 numbers of the fence for a double and easily scoring Welton for a 1-0 edge.

Lawlor’s only blip of the evening came in the top of the eighth inning when Gamecock catcher Grayson Greiner hit a solo shot over the left center field fence.

Georgia responded by reclaiming the lead with two runs in the bottom of the eighth inning. With one out and runners on first and second,Welton hit a sharp grounder that the Gamecocks’ second baseman Jordan Gore scooped up and flipped to shortstop and on an errant throw to first base, allowed freshman Mike Bell to score the go ahead run. After Welton stole second, Cole hit a sharp single to right field, bringing in Georgia’s third run.

“We needed that win tonight,” said Georgia coach Scott Stricklin. “We’ve been on the road the last two weeks and haven’t played very well. Ryan Lawlor was outstanding again for us; we got some big hits, took advantage of some of their mistakes and played excellent defense. This was a great win in front of great crowd and the kind of start we needed in a crucial series.”

Georgia returns to Foley Field Saturday for the second game of the series with South Carolina. Freshman Robert Tyler will start while the Gamecocks will counter with sophomore Jack Wynkoop. First pitch is slated for 1:05 pm EDT and the game will be televised by CSS.