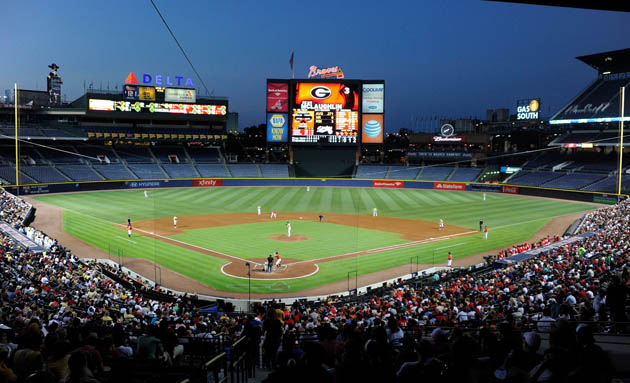 ATHENS, GA – Georgia Tech outdueled Georgia at Turner Field on Tuesday night, beating the Bulldogs 2-0 in front of a crowd of 21,310. With the win, Georgia Tech took the three-game season series over the Bulldogs.

Georgia (25-26-1) used a total of six pitchers in Tuesday night’s game, with Heath Holder (0-1) ultimately being credited with the loss. Starter Dylan Cole set a career high, pitching four scoreless innings while surrendering just two hits with no walks and no strikeouts. Both Conor Welton and Sean McLaughlin recorded two hits on the night.

Georgia Tech (30-23) starter Matt Grimes pitched seven scoreless innings, allowing just four hits and three walks while striking out two. Grimes ultimately earned the win to improve to 5-2 on the season. Sam Clay earned his sixth save of the season. Matt Gonzalez went 1-for-2 with a run scored and a stolen base.

The Bulldogs threatened to strike first in the bottom of the sixth inning. Welton started the inning off with a lead off single, and then advanced to second on a ground out. Welton then tried to score on a two-out single by McLaughlin, but was thrown out at the plate to end the inning.

Georgia Tech was able to get on the board first in the top of the seventh inning after loading the bases with just one out. A hit batter and two walks loaded the bases for the Yellow Jackets, and then A.J. Murray was able to score on a wild pitch strikeout by Ross Ripple. Ripple was able to strikeout Daniel Spingola to end the inning with runners stranded on second and third, avoiding any further damage in the inning.

The Yellow Jackets added another run in the top of the eighth to extend their lead to 2-0. Matt Gonzalez reached base on a one-out single and then stole second base, before advancing to third and then later scoring on separate wild pitches by Ripple.

“This one hurts,” Georgia head coach Scott Stricklin said following the game. “You never want to lose to your rival. It stinks, but there’s nothing you can do about it. We’ve got to start our weekend tomorrow and get back and practice. We’re playing a huge SEC series as the last series of the year, and that was our first goal as a team. We’re playing a huge series against a very good team in our home field and the SEC Tournament and a Regional Bid are on the line. I’m proud of where we’ve put ourselves but I’m not happy about tonight and the guys aren’t happy about tonight.”

Georgia will return to action on Thursday May 15 as the Bulldogs play host to Southeastern Conference opponent Kentucky. The three-game series marks the regular season finale. Ryan Lawlor is expected to start game one of the series, which starts at 7 p.m. eastern at Foley Field.