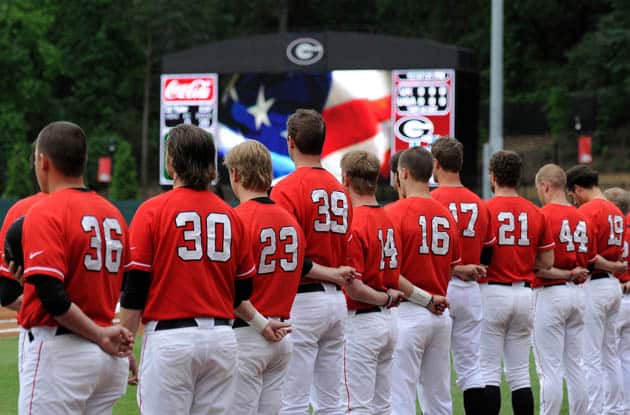 ATHENS, GA – Georgia will face 20th-ranked Mississippi State in the first round of the SEC Baseball Tournament Tuesday night at the Hoover Metropolitan Stadium on CSS-TV in Hoover, Ala. The game will follow the Alabama-Kentucky contest that is scheduled to start at 5:30 p.m ET (CSS-TV).

Georgia (26-28-1, 11-18-1 SEC), under the direction of coach Scott Stricklin, earned the final spot in the 12-team field after defeating Kentucky 11-10 Saturday in Athens. Mississippi State (35-20, 18-12 SEC) is the fifth seed after winning two of three against 19th-ranked Alabama in Tuscaloosa this past weekend. MSU plans to start left-hander Lucas Laster (0-0, 1.52 ERA) while Georgia has not announced a starter.

The first day of the SEC Tournament is single elimination and also features No. 6 seed Vanderbilt versus #11 seed Tennessee at 10:30 a.m. ET (SportSouth-TV) followed by #7 seed Arkansas versus #10 seed Texas A&M (SportSouth-TV). Then, the #8 seed Alabama battles #9 seed Kentucky at 5:30 p.m. (CSS-TV). The top four seeds earn first round byes and will be in action Wednesday when the tournament switches to a double-elimination format. Overall, the tournament features the divisional champions (Florida and Ole Miss) plus 10 at-large teams based on conference winning percentage. The teams are seeded 1-12 with the divisional champions the top two seeds.