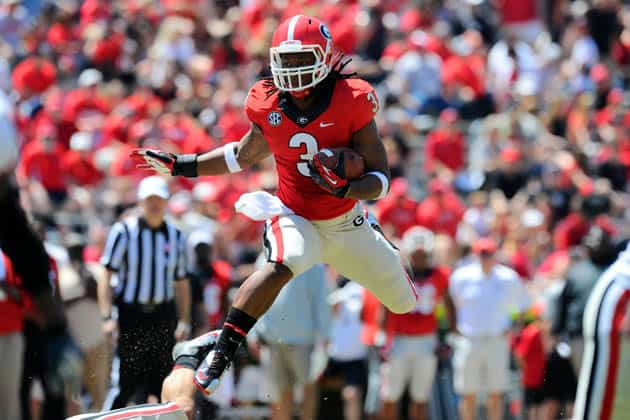 Mark Schlabach of ESPN has released his Post-Spring Way-Too-Early Top 25 and the Georgia Bulldogs are ranked 8th.

Here’s what he has to say about the Bulldogs:

With quarterback Hutson Mason taking control of the offense and tailback Todd Gurley finally looking healthy, Georgia seems to be fine on offense heading into the offseason. The Bulldogs believe their offensive line should be better, especially with tackle John Theus finally recovering from a wrist injury that prevented him from doing much in the weight program the past couple of seasons. Gurley, who was dogged by groin and ankle injuries last season, looked explosive in the spring and will enter the 2014 season as a leading Heisman Trophy candidate. Tailback Keith Marshall, who missed much of last season with a torn ACL in his right knee, is expected to be at full strength by June. Georgia’s defense, however, remains a big concern under first-year coordinator Jeremy Pruitt. The Bulldogs have three legitimate All-SEC candidates in linebackers Jordan Jenkins, Leonard Floyd and Ramik Wilson. But Pruitt complained about many of his defensive linemen being overweight and out of shape, and Georgia’s secondary was inconsistent throughout the spring. The Bulldogs might have to count on junior college transfer Shattle Fenteng and a trio of incoming freshmen for immediate help.

What do you think about Georgia being ranked 8th? Too high, too low, or just about right? Let us know in the comments below.