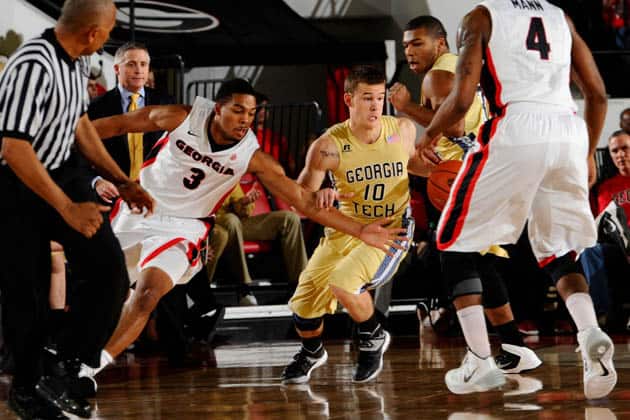 The Georgia Bulldogs are set to open the 2014-15 season against the Georgia Tech Yellow Jackets at McCamish Pavilion on Friday, November 14, 2014, SicEmDawgs.com has learned through an open records request.

It will be the first time the two in-state rivals have met to open the season since 1977.

The contract for the game was signed by Georgia Tech on May 27, but has not yet been signed by UGA Director of Athletics Greg McGarity.

Georgia Tech has won three straight over Georgia and now leads the overall series 104-86. In their last meeting on Nov. 15, 2013, the Yellow Jackets defeated the Bulldogs 80-71.

The Bulldogs are also slated to visit UT Chattanooga on a date to be determined.

In addition, Georgia will play four games in the 2014 NIT Season Tip-Off. UGA is one of four host schools for the tournament, along with Gonzaga, Minnesota, and St. John’s. Twelve “visiting teams” will compete in the NIT Season Tip-Off, and the only one currently known is Western Kentucky.

Georgia is reportedly still seeking an opponent for their final non-conference game on Jan. 3, 2015.