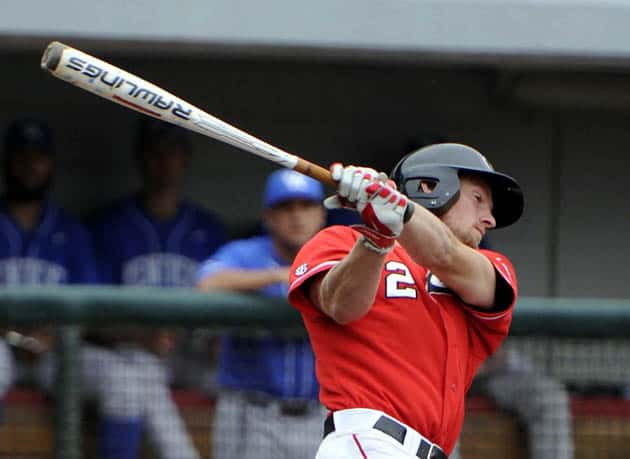 Georgia (26-28, 11-18-1) starter Robert Tyler pitched seven innings and allowed three runs on eight hits with three strikeouts and no walks, and earned the win to improve to 6-4 on the season. Hunter Cole (3-for-4, four RBIs),

Nelson Ward (3-for-5, three RBIs), and Brandon Stephens (3-for-4, one RBI) each had three hit games. Every Bulldog in the starting lineup registered a hit in the game. Before the game, the Bulldogs honored seniors Patrick Boling, Dylan Cole, and Grant Earls.

Kentucky (32-22, 14-16) rallied from down eight with a six run eighth inning that was sparked by A.J. Reed’s (3-for-5, two RBIs) NCAA-leading 23rd home run of the season and a Matt Reida (2-for-5, four RBIs) grand slam. Zack Brown (0-1) started the game but surrendered four runs on seven hits through three innings and was credited with the loss.

“We swung the bats very well,” Georgia head coach Scott Stricklin said following the game. “Robert Tyler was very good on the mound. We had a nice lead and felt pretty good about it but the wind was blowing out and [Kentucky is] a very good offensive team. It was unfortunate that we let them back in [the game]. It was way too close for comfort, but the bottom line is that we found a way to win.”

The Bulldogs wasted little time getting on the board, as they were able to end a 36.1 scoreless inning streak in the bottom of the first. Stephen Wrenn was hit by the first pitch of the inning and moved up to second on a groundout, then scored on a hit-and-run RBI single by Cole. In the next at bat Nelson Ward drove an RBI triple into right-center field and later scored on a ground out to first, putting Georgia up 3-0 after the first inning.

Georgia added to their lead in both the second and the fourth innings, thanks to a couple of RBI hits by Cole. In the second inning, Cole came through with a two-out single that scored Mike Bell from second. In the fourth, Cole hit his third home run of the season, this one a two-run shot to left field. The Bulldogs added another run later in the inning on a sacrifice fly by Brandon Stephens with the bases loaded, extending their lead to 7-0. Through four innings, Cole was 3-for-3 with four RBIs.

Kentucky got on the board in the top of the fifth inning as the Wildcats scored three runs on five hits. Storm Wilson

and Michael Thomas lead off the inning with back-to-back singles, and a throwing error by Webber on Thomas’ single allowed Wilson to score. JaVon Shelby hit a sacrifice fly into left to drive in Thomas before Reed delivered a two-out RBI single into left field to cut Georgia’s lead to 7-3.

Georgia was able to get a couple of runs back in the bottom half of the fifth inning. After a couple of walks and a bunt single loaded the bases for the Bulldogs with one out, Ward drove in two runs with a single into left field. Ward narrowly missed a grand slam earlier in the at bat, hitting a ball over the right field patio that just went foul. The two-run single extended Georgia’s lead to 9-3 after five.

The Bulldogs added two more runs to their lead in the bottom of the sixth to extend their lead to 11-3. Georgia loaded the bases with two outs and Stephens scored on a pass ball. Conor Welton then beat out an infield single that drove in another run. With Welton’s single, every Bulldog starter recorded at least one hit in Saturday’s game.

Kentucky’s bats came alive in the top of the eighth after Tyler was relieved by Cole. Reed hit a solo shot early in the inning, his NCAA leading 23rd of the season, tying a Kentucky single season record. Later in the inning, Reida hit a grand slam over the scoreboard in right field. It was Reida’s fourth home run of the season and cut Georgia’s lead to 11-8.

Cole pitched one third of an inning and gave up five runs on four hits and one walk before being pulled for Jared Cheek. Cheek allowed another run on two hits before getting out of the inning with the lead dwindled down to 11-9.

Kentucky threatened to tie the game in the top of the ninth, scoring one run on two hits. After getting to within one run, the Wildcats got a runner to second base with two outs but Cheek was able to bear down and force Reida to fly out to center field to end the game and to clinch Georgia’s spot in the SEC Tournament.

“This is a big step for our program,” Stricklin said in regards to the upcoming tournament. “We needed to get to the next step and get to Hoover. Having to win today was important and we came out and found a way to do it.”

Georgia will resume play Tuesday May 20 in Hoover, Alabama for the SEC Tournament. The 12th seeded Bulldogs will face the number five seed in the night game immediately following the 4:30 p.m. game.