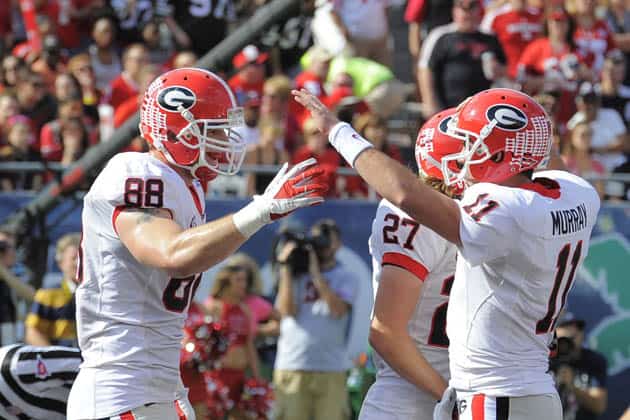 Aaron Murray will continue his football career in Kansas City. The Chiefs selected Murray today in the fifth round of the 2014 NFL Draft (163rd overall).

It was a long wait for Murray, who NFL scouts deem a little too short at 6’1″. Murray is also recovering from a torn ACL he suffered against Kentucky last November.

Tight end Arthur Lynch was selected before Murray, going 155th overall to the Miami Dolphins. As a senior in Athens, Lynch had 30 catches for 459 yards and five touchdowns.

Lynch finished his collegiate career with 56 receptions for 907 yards and eight touchdowns.

Below are some tweets after Murray and Lynch were drafted:

With the 163rd Pick in the #NFLDraft the Kansas City Chiefs select Aaron Murray! #DawgsInTheNFL pic.twitter.com/u89rgWf99S

With the 163rd-overall pick in the 5th round, the #Chiefs select Aaron Murray, QB, Georgia. pic.twitter.com/4bbAtpJJ52

The #UGA and #SEC's All-Time leader in passing is a Kansas City Chief! #NFLDraft #DawgsInTheNFL pic.twitter.com/i1tk3TFgyH