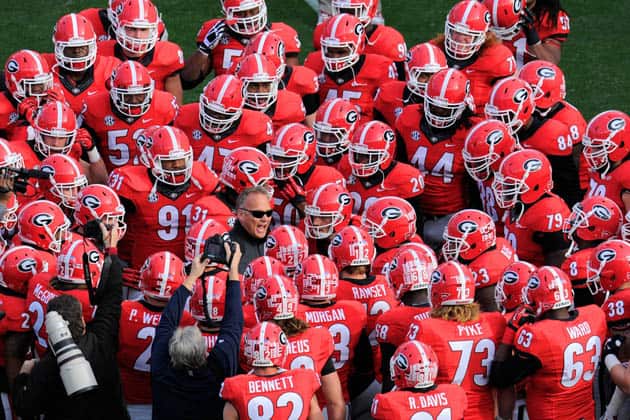 According to a report by CBSSports.com, the Georgia Bulldogs and the Notre Dame Fighting Irish have been in discussions to play a home-and-home football series, possibly in 2018 and 2019.

UGA athletics director Greg McGarity acknowledged that there have been discussions on a series, but no contracts have been signed.

“I think it’d be great for the University of Georgia if we were able to make it happen,” McGarity said.

Georgia and Notre Dame’s first and only meeting on the gridiron was in the Sugar Bowl in January 1, 1981. The Bulldogs defeated the Irish 17-10 in that game to claim the 1980 National Championship.

Last year, Notre Dame head coach Brian Kelly piqued everyone’s interest when he said that Georgia would be a “natural matchup” for the Irish.

Georgia has not announced a new non-conference match-up in almost three years. That is mostly due to the uncertainty of the SEC’s future scheduling format, which should be settled on by this summer. The Bulldogs don’t have any non-conference games scheduled past 2015 outside of their annual rivalry game against Georgia Tech.

The Bulldogs did have a home-and-home series scheduled against Ohio State for 2020 and 2021, but the Buckeyes canceled the agreement over uncertainty with the Big Ten schedule. Georgia was also slated to play Oregon in a 2015-16 series, but the Bulldogs backed out.