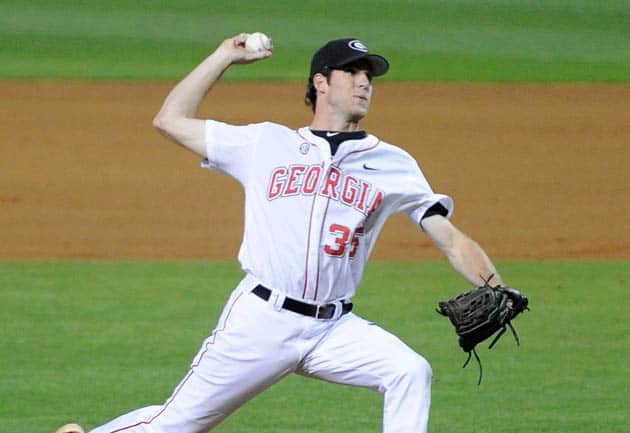 LAWRENCEVILLE, Ga. – Despite seeing the leadoff batter reach base in five innings, Georgia was unable to give its pitching staff enough support and ultimately fell to Kennesaw State 3-1 Tuesday evening at Coolray Field in Lawrenceville. A crowd of 1,100 fans traveled to the home of the Gwinnett Braves, the Triple-A affiliate of the Atlanta Braves, to see the in-state rivals battle.

David Sosebee got the start for Georgia after having the rare occurrence of recording a save in his previous outing. The Cleveland, Ga., native gave up three earned runs on six hits in just three innings of work to take the loss and fall to 0-2 on the season. Chris Erwin earned the win for the Owls, improving to 3-1 overall. Justin McCalvin recorded his eighth save of the season for Kennesaw State.

“It’s a long season and you go through some peaks and valleys and we’re in one of those now. We have to keep positive, keep fighting and we’re going to get right back to work,” Georgia head coach Scott Stricklin said. “Kennesaw State did a nice job tonight but we still need to find a way to win a game like that. We got eight hits and six of those came from two of our freshmen and that’s good to see and we got six scoreless innings out of our bullpen. Bottom line we threw the ball around in that one inning and gave them two runs.”

Leading the Bulldogs offensively was Skyler Weber, going 3-for-3 while scoring Georgia’s only run. Stephen Wrenn also had a multi-hit game, tying a career-high with three hits in five at bats, and picking up an RBI in the process.

Sosebee found trouble early in the first inning as Kennesaw State catcher Max Pentecost extended his hitting streak to 23 games, slapping an RBI single through the right side of the infield and driving home Jacob Bruce from second after a one out single and stolen base. Sosebee recorded the second out with a sharp move to first to record the Bulldogs’ 10th pick-off of the season, as Daniel Nichols slapped down a timely tag to help limit the damage to just one run in the first inning.

Georgia was in position to answer straight back, as the Bulldogs were able to put runners on the corners with two away for Zack Bowers. After a leadoff single by Wrenn, the freshman advanced to second on a fielder’s choice off the bat of Conor Welton and, after a walk to Hunter Cole, a fielder’s choice put Wrenn 90 feet from home plate and Nelson Ward on first. Bowers, however, was unable to bring home the tying run, and the Bulldogs went to the second inning down a run.

Georgia saw another chance squandered as it advanced two runners to scoring position after Weber laid down a sacrifice bunt. However, after Mike Bell failed with a bunt attempt of his own, Wrenn saw a well- hit ball to right field land in the glove of Alex Liquori and end the inning for Georgia.

After a single by Dylan Ivey to start the third inning, a tough hop on a ground ball to Mike Bell at second base on a potential double-play ball saw the Owls put two runners on base with no outs. Both runners would move into scoring position on a wild pitch by Sosebee that miraculously didn’t see a run score or an out recorded.

Sosebee appeared to regain control of the inning as he recorded his second pickoff of the game at second base. After an RBI single from Bruce the Bulldogs’ starter attempted the same trick too many times and saw his pickoff attempt sail into right field with Bruce moving all the way to third on the error. Pentecost would record his second RBI of the game, driving in Bruce with a double to left field.

Georgia would put the leadoff man on base for the third consecutive inning as Welton was hit by the first pitch in the bottom of the third. Despite both Cole and Bowers displaying their power swings, including Cole riding one almost to the 400 foot sign in center, the Bulldogs would come up empty and went to the fourth inning trailing 3-0.

The Bulldogs got on the board in the bottom of the seventh as they were able to take advantage of a leadoff hit. Skyler Weber got the inning started with a leadoff double and was driven home by Wrenn who was able to poke a single past the outstretched glove of Ivey at second base. Despite Wrenn recording his team leading 15th stolen base of the season, the Bulldogs were not able to cut the lead anymore, going to the eighth with the score at 3-1.

While Georgia’s offense struggled to gain any traction at the plate, the bullpen proved impressive in keeping Georgia in the game. Six Bulldog pitchers combined to throw six scoreless innings, including five strikeouts, while giving up only two combined hits.

Georgia returns to action this weekend as it travels to Nashville for a weekend series with Vanderbilt. Game one is slated for 7:30 p.m. ET on Friday.