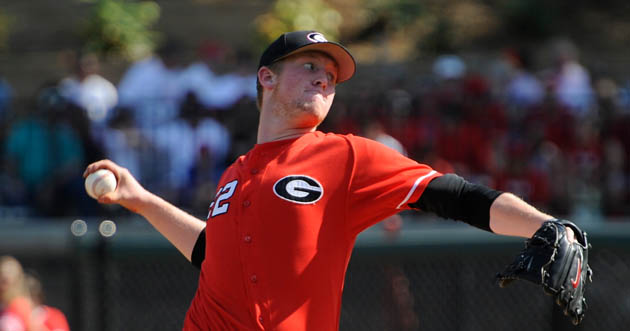 With the win, Georgia improves to 21-14-1 overall (7-7-1 SEC), while Tennessee drops to 23-11 (6-9 SEC). The Bulldogs also claimed their third straight SEC series win, and this time after dropping the opener on Thursday. The Bulldogs have not achieved this feat since 2011, and this is only the second time they have done this since the 2008 College World Series Finalist season.

Freshman Robert Tyler got the start and the win for the Bulldogs, improving his mark to 4-2 on the campaign. He pitched six innings, allowing three runs, two earned, on four hits, while also striking out five. Right-handed reliever David Sosebee came in for three innings of one run relief to close out the game for Georgia. Sosebee notched his first career save, and Georgia’s second save of the season.

Georgia’s offense was lead by Daniel Nichols who went 3-for-4, tying a career high with three hits, he also added two RBIs. Nelson Ward and Zach Bowers also both racked up 2 RBIs on the day. The leaders in the runs column on Saturday were Hunter Cole and Stephen Wrenn, who tallied three and two respectively.

“Losing on Thursday was a little bit disappointing, but the biggest thing about that was that we came back that night, and we kept fighting. We made them use some of their really good bullpen, and Ross Ripple on Thursday kept our bullpen fresh, so it was a loss on Thursday, but looking back it helped us win these games on Friday and Saturday,” said Georgia head coach Scott Stricklin. “Today our kids really battled, Robert Tyler gave us another quality start, and David Sosebee gave us three really good innings. We also had great defense and an awesome atmosphere with this sellout crowd, you really can’t ask for more than that.”

Georgia scored the initial runs of the game in the first inning, when they loaded the bases and Nichols came through at the plate. Wrenn led off the first with a sharply hit grounder right past the Tennessee first baseman Nathaniel Maggio. Next Cole, doubled on a very similar shot past Maggio, then Conor Welton loaded the bases when a pitch hit him. Two batters later Nichols ripped a single to left field, to give the Bulldogs an early 2-0 lead.

Tennessee scored their first run in the third, when Will Maddox doubled down the third base line. Vincent Jackson had reached one batter prior on a single up the middle, and Jackson’s speed allowed him to circle the bases on Maddox’s two-bagger.

In the fifth Georgia put four on the board, extending their lead to five. Wrenn led off the inning with a single to center field, Wrenn then advanced to second on an errant pick off attempt by Marks. After a walk by Cole, Welton laid down a sacrifice bunt, Marks gathered the ball cleanly, but again threw wild to first allowing Wrenn to score and Cole to advance to third. Next, Nelson Ward slashed one past the Tennessee shortstop scoring Cole. A couple batters later, Posey walked setting Bowers up for a two run double, which was crushed to the left field warning track.

The Volunteers fought back a little in the sixth, when they picked up two runs. Maddox reached base to start the inning on a error by first baseman Nichols, A.J. Simcox then walked. After a flyout, designated hitter Nick Senzel put one in the left-center gap scoring two. On the hit Senzel got a little too greedy and Wrenn and Ward were able to make a great relay team to nail him at third.

In the bottom of the sixth Georgia responded with one of their own. With one out Cole walked and Welton drove him around to third on a single to right field. Ward then knocked Cole in with a sacrifice fly to deep center. Tennessee later scored the last run of the game in the eighth on a Senzel single to right, this put the score at the final total of 7-4.

Up next, Georgia travels to Georgia Tech Tuesday. First pitch against the Yellow Jackets will be at 7 p.m., and the game will be televised by CSS. Georgia returns to SEC action on Friday when they travel to Gainesville to take on Florida at 7:30 p.m., that game will also be televised by CSS.