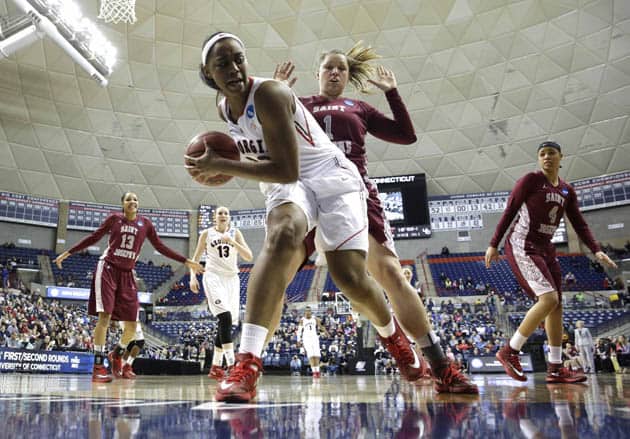 Georgia was unable to recover from two scoring droughts in either half and, despite a second half surge, fell to the St. Joseph’s Hawks 67-57 in the first round of the NCAA Tournament.

Georgia was led by Erika Ford with 16 points, while Merritt Hempe notched 13 points and Krista Donald scored 10. Donald also recorded her fourth double-double of the season and sixth of her career.

“Give credit to Saint Joseph’s,” head coach Andy Landers said. “They came out and seized control of the game and maintained that for the rest of the first half. In the second half, we were able to come back and take the lead. At that point, there were a couple of possessions where they got an offensive rebound or we fumbled a ball out of bounds. We were forced to play defense over and over, and I think we dissolved. All the hard work we put in to come back went away at that point.”

Georgia encountered some early offensive difficulties with the Lady Bulldogs shooting just 20 percent from the floor through the first 8:02 of action as the Hawks were able to open up an early 14-7 lead. Those offensive struggles were compounded as the Lady Bulldogs struggled to contain an effective and energetic St. Joe’s offensive that would shoot 47.8 percent in the first half.

After St. Joe’s extended their lead to double digits on a fastbreak jumper by Kelsey Berger, the Lady Bulldogs began to chip away at the Hawks lead, trimming it to three points on two occasions. With 6:10 on the clock a Hempe tip-in saw the deficit close to 24-21.

After the teams exchanged buckets, St. Joseph’s was able to open a six point cushion before an Erika Ford 3-pointer closed the score to a single possession game. The Hawks, however, were able to find their offensive rhythm to close the half, taking advantage of three successive Lady Bulldogs’ turnovers to end the first half with an eight point lead with the score at 38-30.

Krista Donald led Georgia in the first stanza with nine points and seven rebounds while Erika Ford closed the period with eight points.

The Lady Bulldogs came out of the locker room ready to fight for their postseason lives in the second period and soon found themselves within two points behind two layups and a free throw from Shacobia Barbee trimming the Hawks lead to 42-40.

Georgia would eventually rally back to tie the game at 46-46 at the 11:56 mark in the second half. After an Erika Ford 3-pointer from trimmed the deficit to just one point, Hempe was fouled during a physical tussle in the post and went to the line with the chance to give Georgia its first lead since early in the first period. Despite missing her first shot Hempe coolly slotted her second to tie the game.

Georgia was able to take the lead with 10:02 left in the game on a Tiaria Griffin 3-pointer that gave the Lady Bulldogs their first lead since the first half. From there, however, St. Joseph’s was able to open a lead which stretched to eight with 5:39 left in the game as the Hawks found continued success offensively while stifling Georgia.

The Hawks were able to stretch the lead back to double digits on a pair of free throws by Natasha Cloud that moved the score to 53-63. From there the teams exchanged buckets with the Lady Bulldogs unable to close the gap.