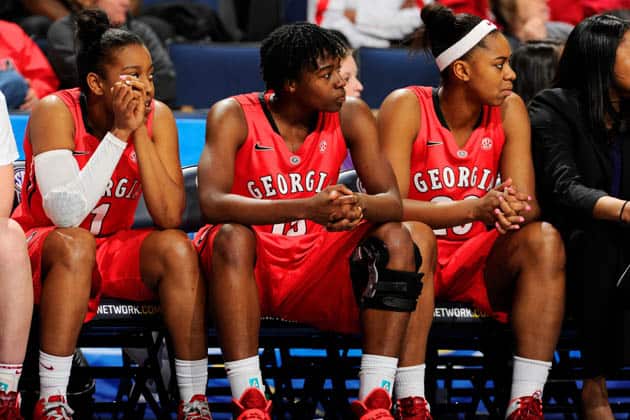 DULUTH, Ga. – No. 5 South Carolina recorded its second win over Georgia in eight days – much in the same fashion as the first match-up – in the quarterfinal round of the SEC Tournament at the Arena at Gwinnett Center on Friday.

“It was almost identical in many ways to the game in Columbia last week,” head coach Andy Landers said. “Did I see it coming? No. Disappointed? Yes. Were we competitive? Absolutely not.”

South Carolina opened up a 10-2 lead just over five minutes into the game as the Lady Bulldogs struggled from the field and made just one of their first 11 shots from the floor.

The Gamecocks’ advantage reached 18 points at 27-9 with 5:49 left in the half before Merritt Hempe and Donald combined to score all the points in a 9-2 run to trim the margin to 29-18 two minutes later.

South Carolina then scored the final six points of the period to push its lead back to 35-18 at the intermission.

The Gamecocks’ edge bulged to 25 points four minutes into the second half, and Georgia never pulled closer than 15 points thereafter.

“We got whipped, plain and simple,” Landers said. “South Carolina came out and did the exact things that we talked about not wanting them to do. They transitioned us. They got the ball to the basket early in the game and created the same lead they created in Columbia. They did that off of turnovers and missed jump shots early in the game.

“At that point I’d be remiss if I didn’t say they were terrific,” Landers continued. “They did what they wanted to do. They got the ball inside, they got it in transition. They had a couple big baskets in the first half coming off the bench in the form of three‑point shots. They should feel very good about what they did today.”

The Lady Bulldogs will now await the announcement of the NCAA Tournament bracket a week from Monday, on March 17.

Georgia ranks No. 2 nationally in all-time NCAA bids, earning invitations to 30 of 32 editions of “March Madness” since women’s intercollegiate athletics came under the auspices of the NCAA in 1981. The Lady Bulldogs have appeared in 19 consecutive NCAA Tournaments since 1995, the third-longest active streak of appearances in “March Madness” behind only Tennessee, Stanford and Connecticut.