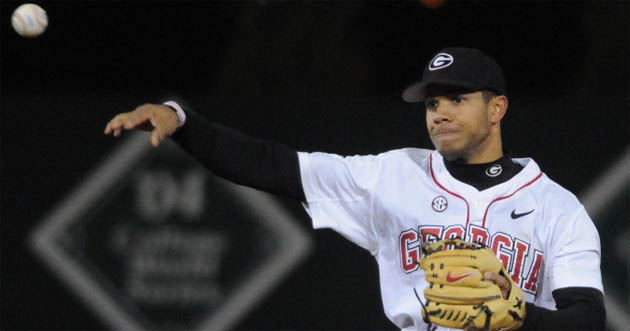 ATHENS, Ga. – No. 20 Clemson used four hits in a three-run first inning to take the early lead and defeat the Georgia baseball team by a score of 16-4 on Tuesday evening at Foley Field.

Starting pitcher Jared Walsh took his first loss of the season for Georgia (14-11-1) after surrendering six hits and four runs in one inning of work. Clate Schmidt earned the win for the Tigers (15-9) after lasting six innings and giving up three runs.

Freshman Stephen Wrenn finished with a pair of RBIs for Georgia, while Nelson Ward went 2-for-4 at the plate and scored a run. Hunter Cole, Zack Bowers, Heath Holder and Mike Bell also notched a hit apiece on the evening.

Clemson finished with 17 hits, including seven doubles and a home run. Tyler Slaton went 3-for-5 with a pair of RBIs and Steven Duggar finished 4-for-6 with four RBIs and a run scored.

“We just didn’t come out here to compete tonight,” said Georgia head coach Scott Stricklin. “We played a very good team, and they played better than us. Now it’s just time to turn the page and move on from this game. We’re not going to use it as an excuse, and we’re not going to be tired at practice tomorrow, I can promise you that. We have to make a decision now about what type of team we’ll be for the rest of the season.”

The Tigers led off with four straight hits in the first inning, including back-to-back RBI singles from Garrett Boulware and Duggar. After the Bulldogs turned their SEC-leading 28th double play of the year, Boulware came home to score on a passed ball to give Clemson an early 3-0 advantage.

Georgia was able to get one run back in the bottom half of the frame after Ward came home to score on a Clemson fielding error. Clemson picked up one more run in the top of the second before adding a pair in the fourth on a two-RBI double from Weston Wilson that gave the Tigers a 6-1 lead.

Clemson continued to add to its lead in the fifth, scoring seven runs off three Bulldog pitchers in the inning. Chris Okey drilled a two-run homer to left and five batters later, Slaton sent an RBI single into center before a fielder’s choice RBI by Tyler Krieger brought home another Tiger runner. Duggar capped off the inning with a three-RBI double to center to push Clemson’s lead to 13-1.

Georgia notched a pair of runs in the sixth, as Bowers was hit by a pitch and later advanced to second on an error with just one out. Following a walk to Skyler Weber, Bell dropped a single into right field to load the bases for fellow freshman Wrenn.

Wrenn delivered with a fielder’s choice RBI that plated Bowers, and Weber later came home to score on a wild pitch, trimming Clemson’s lead to 13-3.

Freshman right-hander Drew Moody pitched a career-high 2.1 scoreless innings for Georgia while also recording a career-high three strikeouts from the fifth through the seventh innings.

After a scoreless seventh inning by both teams and a scoreless top of the eighth for Clemson, Georgia scored one more run in the bottom of the eighth. Posey reached on a fielder’s choice, Holder singled to right and McCance was hit by a pitch to load the bases before Wrenn drew an RBI walk to score Posey.

Georgia returns to SEC action this weekend when it plays host to Texas A&M for a three-game series at Foley Field. First pitch on Friday is set for 7 p.m., followed by a 1 p.m. start time for both Saturday and Sunday.